Spencer Wise - "The Emperor of Shoes"

Spencer Wise - "The Emperor of Shoes" 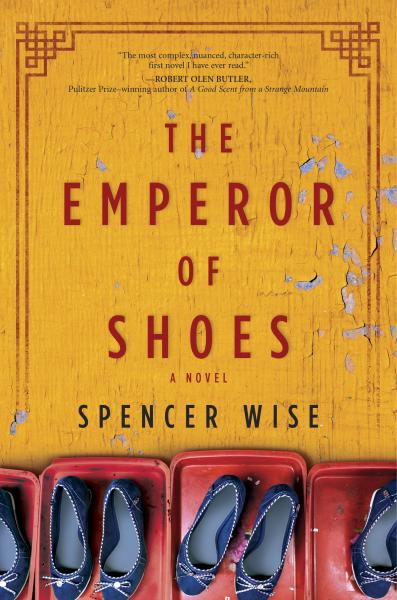 On Monday, June 18th at 7:30pm Warwick's will host Spencer Wise to discuss and sign his debut novel The Emperor of Shoes. Wise teaches at Florida State University and lives in Tallahassee. His fiction, creative nonfiction, and poetry can be found in journals such as Narrative Magazine, Hayden’s Ferry Review, The Florida Review, and The New Ohio Review. He is the winner of the 2017 Gulf Coast Prize in nonfiction. This event is free and open to the public. Reserved Seating is available when the book is pre-ordered from Warwick's for the event. Only books purchased from Warwick's will be signed. Please call the Warwick's Book Dept. (858) 454-0347 for details.

Alex Cohen, a twenty-six-year-old Jewish Bostonian, is living in a remote village in southern China, where his father runs a family-owned shoe factory. Lost and searching, Alex reluctantly assumes the helm of the company, absorbing the generations-old secrets of the trade from his loving but neurotic father. As Alex explores the plant’s vast floors and assembly lines he comes to a grim realization: employers are exploited, regulatory systems are corrupt and Alex’s own father is engaging in payoffs and bribes to protect the bottom line. Then he meets a seamstress named Ivy.

As Alex and Ivy grow close, Alex’s sympathies begin to shift to the Chinese workers, who labor under brutal conditions, stitching, sewing and cobbling shoes for American companies. But when Ivy’s past resurfaces, her broader goals become apparent. She is an embedded organizer of a pro-democratic Chinese party, secretly sowing dissonance among her fellow laborers. Will Alex remain loyal to his father and his heritage? Or will the sparks of revolution ignite?

Drawing on his own family’s experiences, Spencer Wise explores the evolution of a precarious Jewish family empire as it struggles to adapt in a global landscape. Deftly plotted and vibrantly drawn, The Emperor of Shoes is a timely meditation on idealism, ambition, father-son rivalry and cultural revolution set against a striking backdrop of social and technological change in contemporary southern China.