Have I Told You This Already? 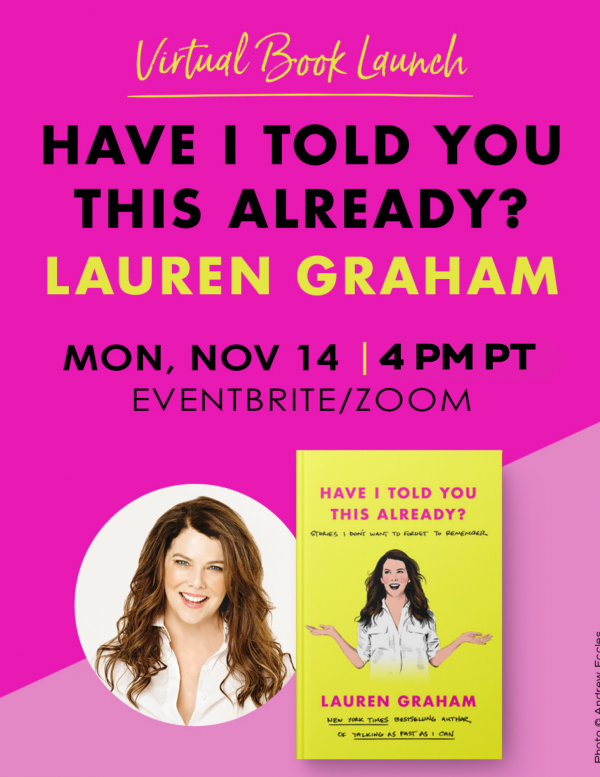 Have I Told You This Already?

Get tickets through the Eventbrite page linked to the green "Buy Tickets Here" button above for access to this exclusive launch event - your ticket includes a copy of HAVE I TOLD YOU THIS ALREADY?

On Monday, November 14th at 4:00pm PST Warwick’s, in partnership with Penguin Random House, presents Lauren Graham as she discusses her new book, Have I Told You This Already?: Stories I Don't Want to Forget to Remember. Lauren Graham is an actor, writer, and producer best known for her roles on the critically acclaimed series Gilmore Girls and Parenthood. She is currently an executive producer on the Disney+ show The Mighty Ducks: Game Changers, in which she also stars. She is the three-time New York Times bestselling author of In Conclusion, Don't Worry About It; Talking as Fast as I Can; and the novel Someday, Someday, Maybe. She has been a successful actor for nearly three decades, appearing in TV, film, and on Broadway. She holds a BA in English from Barnard College and an MFA in acting from Southern Methodist University. Lauren Graham lives in New York and Los Angeles.

Lauren Graham has graced countless television screens with her quick-witted characters and hilarious talk show appearances, earning a reputation as a pop culture icon who always has something to say. In her latest book, Have I Told You This Already?, Graham combines her signature sense of humor with down-to-earth storytelling. Graham shares personal stories about her life and career - from her early days spent pounding the pavement while waitressing in New York City, to living on her aunt's couch during her first Los Angeles pilot season, to thoughts on aging gracefully in Hollywood.

In "R.I.P. Barneys New York" Graham writes about an early job as a salesperson at the legendary department store (and the time she inadvertently shoplifted from it); in "Ryan Gosling Cannot Confirm," she attempts to navigate the unspoken rules of Hollywood hierarchies; in "Boobs of the '90s" she worries her bras haven't kept up with the times; and in "Actor-y Factory" she recounts what a day in the life of an actor looks like (unless you're Brad Pitt).