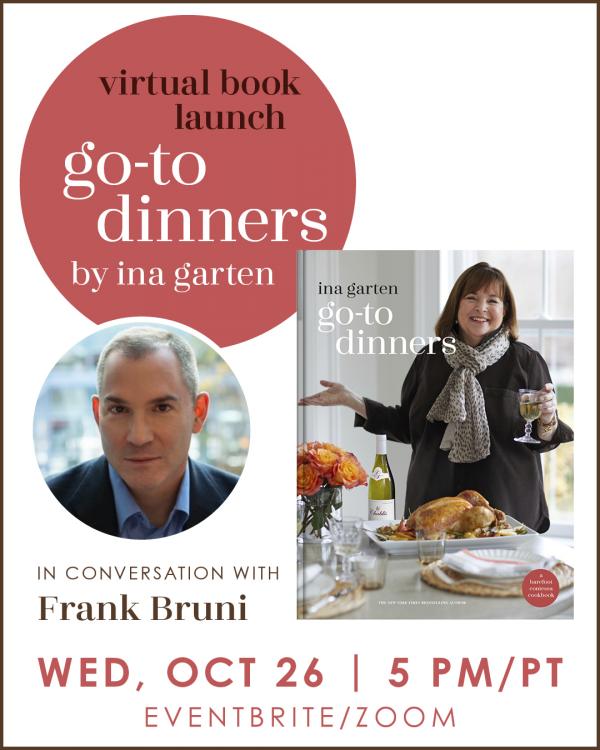 Get tickets through the Eventbrite page linked to the green "Buy Tickets Here" button above for access to this exclusive launch event - your ticket includes a copy of GO-TO DINNERS!

On Wednesday, October 26th at 5:00pm PDT Warwick's will host Ina Garten as she discusses her new book, Go-To Dinners: A Barefoot Contessa Cookbook, in conversation with Frank Bruni. Ina Garten is a New York Times bestselling author, the host of Be My Guest on Discovery+, and host of Barefoot Contessa on Food Network, for which she has won five Emmy Awards and a James Beard Award. She lives in East Hampton, New York, with her husband, Jeffrey.

Even Ina Garten, America’s most-trusted and beloved home cook, sometimes finds cooking stressful. To make life easy she relies on a repertoire of recipes that she knows will turn out perfectly every time. Cooking night after night during the pandemic inspired her to re-think the way she approached dinner, and the result is this collection of comforting and delicious recipes that you’ll love preparing and serving. You’ll find lots of freeze-ahead, make-ahead, prep-ahead, and simply assembled recipes so you, too, can make dinner a breeze.

In Go-To Dinners, Ina shares her strategies for making her most satisfying and uncomplicated dinners. Many, like Overnight Mac & Cheese, you can make ahead and throw in the oven right before dinner. Light dinners like Tuscan White Bean Soup can be prepped ahead and assembled at the last minute. Go-to family meals like Chicken in a Pot with Orzo and Hasselback Kielbasa will feed a crowd with very little effort. And who doesn’t want to eat Breakfast For Dinner? You’ll find recipes for Scrambled Eggs Cacio e Pepe and Roasted Vegetables with Jammy Eggs that are a snap to make and so satisfying. Ina’s “Two-Fers” guide you on how to turn leftovers from one dinner into something different and delicious the second night.

And sometimes the best dinner is one you don’t even have to cook! You’ll find Ina’s favorite boards to serve with store-bought ingredients, like an Antipasto Board and Breakfast-for-Dinner Board that are fun to assemble and so impressive to serve. Finally, because no meal can be considered dinner without dessert, there are plenty of prep-ahead and easy sweets like a Bourbon Chocolate Pecan Pie and Beatty’s Chocolate Cupcakes that everyone will rave about.

For Ina, “I love you, come for dinner” is more than just an invitation to share a meal, it’s a way to create a community of friends and family who love and take care of each other, and we all need that now more than ever. These go-to recipes will give you the confidence to create dinners that will bring everyone to your table. 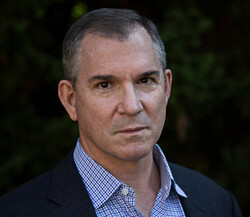 Frank Bruni has been a prominent journalist for more than three decades, including more than twenty-five years at The New York Times, the last ten of them as a nationally renowned op-ed columnist who appeared frequently as a television commentator. He was also a White House correspondent for the Times, its Rome bureau chief, and, for five years, its chief restaurant critic. He is the author of three New York Times bestsellers including The Beauty of Dusk: On Vision Lost and Found. In July 2021, he became a full professor at Duke University, teaching media-oriented classes in the school of public policy. He continues to write his popular weekly newsletter for the Times and to produce occasional essays as one of the newspaper’s official Contributing Opinion Writers.