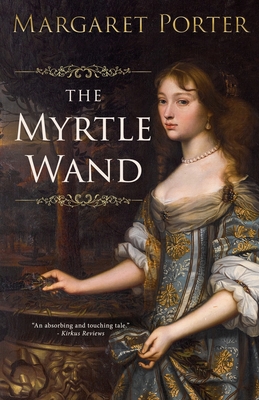 The Myrtle Wand, a retelling and a continuation of the classic ballet Giselle, restores original story elements to transform a tale of blighted romances and betrayals into a quest for redemption and restorative love.

Princess Bathilde de Sevreau, unlike her school friend Myrte and the peasant Giselle, doubts the existence of legendary vilis, ghostly maidens who rise from their graves by night to roam the forest to take revenge on faithless lovers. Until she, too, has cause to fear being ensnared by that spectral sisterhood . . .

Destined for a marriage of convenience with Albin, Duc de Rozel, Bathilde leaves her ancestral ch teau for the Sun King's sophisticated and scandalous court. As participants in royal ceremonies and entertainments, the princess and the soldier gradually recognize deep feelings for each other and mutual hopes for marital contentment.

But the tragic consequences of Albin's brief masquerade as a commoner and the amorous Louis XIV's quest for a mistress divide the lovers. Together and separately, they must overcome conflicting duties and unexpected dangers to determine their fate.

"Audiences familiar with the general outline of Giselle will find Porter's narrative naturally engaging, but she's taken care to keep other readers involved as well . . . An absorbing and touching tale . . . a fully realized, moving portrait of the storied court of Louis XIV." -Kirkus Reviews

"Main characters are fictional, but powered by the real-world experiences of minor players . . . Readers are immersed in a world of court and commoner. A powerful story, highly recommended for its realistic quandaries and strong female characters."

"Lushly atmospheric . . . rich with historical detail. Porter imagines the story behind the iconic Giselle, transporting us to France during the early reign of the Sun King. Betrayal and redemption, magic and religion all cross paths in dangerous pas de deux-and Princess Bathilde finally gets her opportunity to take center stage." -Leslie Carroll, author of Royal Romances: Titillating Tales of Passion and Power in the Palaces of Europe