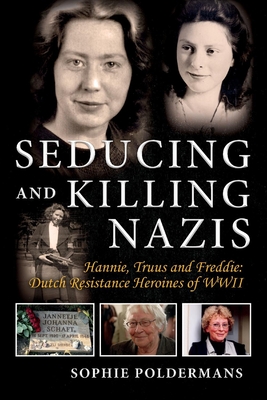 This is the astonishing true story of three teenage Dutch girls, Hannie Schaft and sisters Truus and Freddie Oversteegen, that has inspired many throughout the world.

When Nazi Germany invaded the Netherlands in World War II, these girls took up arms against the enemy by seducing high-ranking Nazi officers, luring them into the woods and killing them. They provided Jewish children with safe houses and gathered vital intelligence for the resistance. They did what they did "because it had to be done." Above all, they tried to remain human in inhuman circumstances.

Hannie Schaft was executed by the Nazis three weeks before the end of the war and became the icon of female Dutch resistance. Truus and Freddie Oversteegen survived the war, but were forever haunted by the demons of their past.

Sophie Poldermans is the founder of "Sophie's Women of War." She personally knew Truus and Freddie Oversteegen for 20 years and worked closely with them for over a decade as a board member of the National Hannie Schaft Foundation.

She is a Dutch women's rights advocate who works as a self-employed author, public speaker, lecturer and consultant on women and war and human rights-related issues from a legal, historical and sociological perspective.

She is the author of "Hannie Schaft. Haar rol in het Nederlandse verzet tijdens de Tweede Wereldoorlog," published in 2003; and "Seducing and Killing Nazis. Hannie, Truus and Freddie: Dutch Resistance Heroines of WWII," published in 2019.

Find out more about her and her work at www.sophieswomenofwar.com.