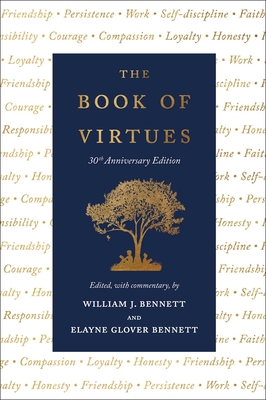 Help your children develop moral character with this updated, 30th anniversary edition of the perennial classic The Book of Virtues.

Almost 3 million copies of the Book of Virtues have been sold since it was published in 1993. It is one of the most popular moral primers ever written, an inspiring anthology that helps children understand and develop character—and helps parents teach it to them. Thirty years ago, readers thought that the times were right for a book about moral literacy. Back then, Americans worried that schools were no longer parents’ allies in teaching good character. As the book’s original introduction noted, “moral anchors and moorings have never been more necessary.” If that was true in the 1990s, it is even more true today. The explosion of information with the Internet has left many unsure of what is valuable and what is not.

Responsibility. Courage. Compassion. Loyalty. Honesty. Friendship. Persistence. Hard work. Self-discipline. Faith. These remain the essentials of good character. The Book of Virtues contains hundreds of exemplary stories offering children examples of good and bad, right and wrong. Drawing on the Bible, American history, Greek mythology, English poetry, fairy tales, and modern fiction, William J. and Elayne Bennett show children the many virtuous paths they can follow—and the ones they ought to avoid. For the 30th anniversary edition, the Bennetts have slimmed down the book’s contents, while also finding room to introduce such figures as Mother Teresa, Colin Powell, and heroes of 9/11 and the War in Afghanistan. Here is a rich mine of moral literacy to teach a new generation of children about American culture, history, and traditions—ultimately, the ideals by which we wish to live our lives. The updated edition of The Book of Virtues will continue a legacy of raising moral children far into a new century.

Dr. William J. Bennett is one of America’s most influential and respected voices on cultural, political, and educational issues. Host of The Bill Bennett Show podcast, he is also the Washington Fellow of the American Strategy Group. He is the author and editor of more than twenty-five books. Dr. Bennett served as the secretary of education and chairman of the National Endowment for the Humanities  under  President  Ronald  Reagan  and  as  director  of  the  Office  of  National  Drug  Control  Policy  under  President  George  Herbert  Walker Bush.

Elayne  Glover  Bennett  is  the  founder  and  president  of  the  Best  Friends Foundation and the author of a model curriculum that tar-gets bullying, drug abuse, and violence prevention through a model character development curriculum for elementary, middle, and high school students. She is currently in her thirty-fifth year of teaching this  curriculum,  which  has  been  delivered  to  thousands  of  public  school  students  in  Washington,  DC,  and  across  the  nation.  She  is  the author of Daughters in Danger: Helping Girls Thrive in Today’s Culture.

“The Book of Virtues touches the heart—and thereby helps shape the mind. It contains many of the heroic and moral tales that over the years I have grown to love, as well as a great many more that I was delighted to discover for the first time. This is an uplifting and diverting book. Parents will buy it to read to their children and find themselves dipping into it out of pure pleasure.” —Margaret Thatcher