The Only Woman in the Room (MP3 CD) 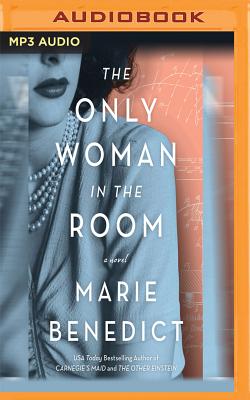 By Marie Benedict, Suzanne Toren (Read by)
$24.99
Have a question? Please let us know and we will reply as soon as we can. Thanks!

“The Only Woman in the Room is the story of a woman who recreated herself several times over the course of her lifetime, as an actress who was a constant disappointment to her mother, a wife who learned state secrets about the Nazis, a refugee who convinced a movie mogul to cast her in his films, and a genius who developed a system to track German torpedoes but was turned away by the U.S. military because they believed she was too beautiful to be smart. The story of Hedy Lamarr is so much more than that of a Hollywood actress and war refugee. The fictional account Marie Benedict has woven is insightful, moving, and impossible to put down!”
— Kristin Pidgeon, Riverstone Books, Pittsburgh, PA

“Marie Benedict has once again brought a deserving woman out of the shadows and into the spotlight. Hedy Lamarr, although well-known for her triumphs on the silver screen, should be featured in history classes for her contributions to science. Compelling, fascinating, and impossible to put down, The Only Woman in the Room is another triumph for Benedict.”
— Mary O'Malley, Anderson's Bookshop (La Grange), La Grange, IL