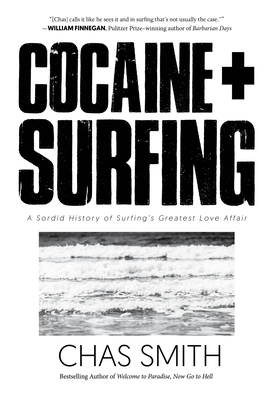 By Chas Smith, Matt Warshaw (Introduction by)
Email or call for price.
Out of Print

From the author of Welcome to Paradise, Now Go To Hell, a finalist for the PEN Center USA Award for Nonfiction It's no surprise that surfers like to party. The 1960-70s image, bolstered by Tom Wolfe and Big Wednesday, was one of mild outlaws--tanned boys refusing to grow up, spending their days drinking beer and smoking joints on the beach in between mindless hours in the water. But in the 1980s, as surf brands morphed into multibillion-dollar companies, the derelict portrait began to harm business. The external surf image became Kelly Slater and Laird Hamilton, beacons of health, vitality, bravery, and clean-living. Internally, though, surfing had moved on from booze and weed to its heart's true home, its soul's twin flame: cocaine. The rise of cocaine in American popular culture as the choice of rich, white elites was matched, then quadrupled, within surf culture. The parties got wilder, the nights stretched longer, the stories became more ridiculously unbelievable. And there has been no stopping, no dip in passion. It is a forbidden love, and few, if any, outside the surf world know about this particular rhapsody. Drug use is kept very well-hidden, even from insiders, but evidence of its psychosis rears its head from time to time in the form of overdoses, bar fights, surf contests, murders, and cover-ups. Cocaine + Surfing draws back the curtain on a hopped-up, sometimes-sexy, sometimes-deadly relationship and uses cocaine as the vehicle to expose and explain the utterly absurd surf industry to outsiders.

Chas Smith the author of Welcome to Paradise, Now Go to Hell (It Books, November 2013), which was optioned for television by Fox 21 (Homeland and Sons of Anarchy) with producers at Television 360 (Game of Thrones) and a finalist for the PEN Center USA Award for Nonfiction. Chas began his writing career as a foreign correspondent, penning pieces for Vice, Paper, and Blackbook, amongst others, from Yemen, Lebanon, Syria, Somalia, Azerbaijan and Colombia which led to a brief career as a war correspondent for Current TV. After being kidnapped by Hezbollah during the 2006 Israel-Lebanon war he transitioned to surf journalism where he was a featured writer at the brash Stab before becoming Editor at Large at Surfing Magazine. There he developed a reputation as the most controversial voices in the space. Matt Warshaw, author of the Encyclopedia of Surfing, calls him, "Bright and hyper-ironic." William Finnegan, Pulitzer Prize-winning author of Barbarian Days, says that Chas, "...calls it like he sees it and in surfing that's not usually the case." Chas Smith is the co-owner of a surf website, BeachGrit.