Only What We Could Carry: The Japanese American Internment Experience (Paperback) 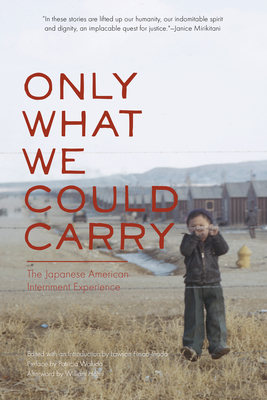 In the wake of wartime panic that followed the Japanese attack of Pearl Harbor, more than 100,000 Japanese Americans residing along the West Coast of the United States were uprooted from their homes and their communities and banished to internment camps throughout the country. Through personal documents, art, and propaganda, Only What We Could Carry expresses through words, art, and haunting recollections, the fear, confusion and anger of the camp experience. The only anthology of its kind,

Only What We Could Carry is an emotional and intellectual testament to the dignity, spirit and strength of the Japanese American internees.

Lawson Fusao Inada is regarded by many as the poet laureate of Japanese America.He is co-editor of Aiiieeeee!(1983) and The Big Aiiieeeee! (1991) and author of Legends from Camp (1992) and Drawing the Line (1997). Inada is a multiple recipient of NEA Poetry Fellowships and has read his works at the White House. He has been Professor of English at Southern Oregon State College since 1966.Patricia Wakida's published books, essays, stories, and poetry include: Only What We Could Carry: The Japanese American Internment Experience, Generations Experience; A Japanese American Community Portrait, Letters of Intent, the San Francisco Bay Guardian, Nikkei Heritage, Kyoto Journal, Santa Barbara Review, and the International Quarterly.William Hohri is a Nisei born in San Francisco in 1927. He was interned at the Manzanar camp during his high school years and graduated from the University of Chicago after the war. He is the author of Repairing America: An Account of the Movement for Japanese-American Redress (1988) and was a columnist for the Rafu Shimpo newspaper.