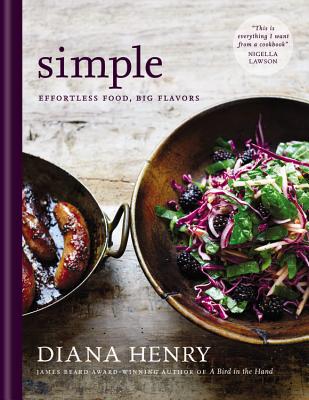 
No-one is better than Diana Henry at turning the everyday into something special. Here is a superb collection of recipes that you can rustle up with absolutely no fuss, but which will knock your socks off with their flavor.

Peppered throughout the book are ingenious ideas such as no-hassle starters and sauces that will lift any dish. From Turkish Pasta with Caramelized Onions, Yoghurt and Dill and Paprika-baked Pork Chops with Beetroot, Caraway and Sour Cream to Parmesan-roasted Cauliflower with Garlic and Thyme, Diana takes the kind of ingredients we are most likely to find in our cupboard and fridge - or be able to pick up on the way home from work - and provides recipes that will become your friends for life.

Diana Henry has won numerous awards for her journalism and books and is the food columnist for The Sunday Telegraph. A Bird in the Hand received a 2016 James Beard Award , and A Change of Appetite, voted Cookbook of the Year by the Guild of Food Writers in 2015, was a James Beard Award nominee. Diana was named "Cookery Writer of the Year" by The Guild of Food Writers in 2009 and in 2007 for her column in the Sunday Telegraph's Stella magazine. She is a contributor to many magazines including Eating Well, Red, House and Garden, Country Living and Waitrose Food Illustrated. Diana has written nine other books including Crazy Water Pickled Lemons, Cook Simple, Salt Sugar Smoke, and Roast Figs Sugar Snow. Her new book, Simple, publishes in September 2016. Diana lives in London with her partner and children.

What distinguishes her work isn't just the quantity of recipes she produces, but their quality and originality, particularly in the creativity of her flavor combinations.


If you reach for cookbooks that you'll use over and over
again (instead of glorified coffee table books), Diana is your girl.—Food 52


The
forthright recipes and chatty asides are plain in the way that Jane Grigson and
Richard Olney were plain, which is to say that these writers share a lovely
economy both of language and of cooking itself.—Los Angeles Times


The
pages are loaded with....Henry's cheerful commentary (the joys of canned food)
and, of course, a lot of truly wonderful recipes.—Los Angeles Times


Food
writer Henry has a knack for genius flavor combinations, and her latest doesn't
disappoint.—Library Journal


This
is truly modern cooking. She manages to guide you through recipes with very
little instruction, because she's so precise with her wording.—New York Times


Henry
takes a low-key turn in this elegant cookbook, focusing on simple, tasty
recipes for all times of day that can be prepared with a minimum of fuss. She delivers on that promise.—Publishers Weekly


It's
the kind of prose that makes you want to run immediately into the kitchen to
have your way with some figs. And when
you get there, you discover that none of her recipes are fussy, and all of them
work. To be accessible, reliable and
still thrilling is a very rare achievement indeed.—New York Times


The
title tells you most of what you need to know. But don't you dare mistake Simple
for "run-of-the-mill".—Food 52

Who's the Best British Food Writer? (Clue: It Isn't Nigella or Jamie)
Why you should know the wonderful, warm, and always delicious Diana Henry.—Martha Stewart Living