Raising Expectations (and Raising Hell): My Decade Fighting for the Labor Movement (Paperback) 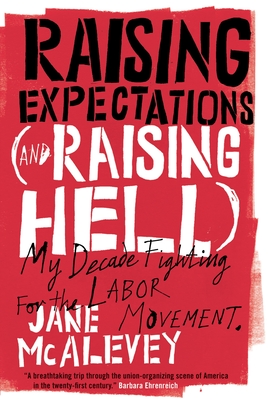 This “breath-taking trip through the union-organizing scene of America in the 21st century” reveals the victories and unconventional strategies of a renowned—and notorious—militant union organizer (Barbara Ehrenreich, author of Nickel and Dimed)

In 1995, in the first contested election in the history of the AFL-CIO, John Sweeney won the presidency of the nation’s largest labor federation, promising renewal and resurgence. Today, less than 7 percent of American private-sector workers belong to a union, the lowest percentage since the beginning of the twentieth century, and public employee collective bargaining has been dealt devastating blows in Wisconsin and elsewhere. What happened?

Jane McAlevey is famous—and notorious—in the American labor movement as the hard-charging organizer who racked up a string of victories at a time when union leaders said winning wasn’t possible. Then she was bounced from the movement, a victim of the high-level internecine warfare that has torn apart organized labor. In this engrossing and funny narrative—that reflects the personality of its charismatic, wisecracking author—McAlevey tells the story of a number of dramatic organizing and contract victories, and the unconventional strategies that helped achieve them.

Raising Expectations (and Raising Hell) argues that labor can be revived, but only if the movement acknowledges its mistakes and fully commits to deep organizing, participatory education, militancy, and an approach to workers and their communities that more resembles the campaigns of the 1930s—in short, social movement unionism that involves raising workers’ expectations (while raising hell).

Jane McAlevey Jane McAlevey spent twenty-five years as an organizer in the student, environmental, and trade union movements. She is a Contributing Writer at the Nation, and lives in the San Francisco Bay Area.

“This book is gripping, funny, sad, and very thought-provoking. Jane McAlevey uses her own experiences in a movement that has been undergoing dramatic changes—within a workforce that has undergone even greater changes—to suggest to the reader the necessity and potential for a transformation of the union movement into a real labor movement. Once I started reading it, there was no stopping.”
—Bill Fletcher Jr., author of “They’re Bankrupting Us!” And Twenty Other Myths about Unions

“This book casts a bright light on the problems of American unions. Jane McAlevey gives us an on-the-ground account of the obstacles the union hierarchy throws in the path of a bold and energetic organizing effort that scored a string of brilliant successes before the hierarchy cracked down. We need to read this book and learn its lessons partly for what it tells us is wrong about unions, but also because it demonstrates that good organizers can in fact succeed. That message is heartening because the simple truth is that we can’t rebuild a democratic left in the United States without a revived labor movement.”
—Frances Fox Piven, author of Who’s Afraid of Frances Fox Piven?

“Raising Expectations is a breath-taking trip through the union-organizing scene of America in the 21st century. In the battles McAlevey recounts, hardly anyone comes out standing tall. But her story, along with those of so many brave health care workers, fills me with hope.”
—Barbara Ehrenreich, author of Nickel and Dimed

“This book renews my faith that organizing works. It calls for a new kind of unionism and makes a compelling case for a new vision for the American labor movement. In the ‘whole worker theory’ that McAlevey tested and retested in real life campaigns, all the issues negatively impacting the poor, working and middle class become the cause of unions, not simply wages and narrowly defined workplace conditions. At a time when climate change is wreaking havoc at home and abroad and communities of color are becoming the vital center of progressive social change, this book offers one path to building a movement that can and must tackle many issues. Raising Expectations is so refreshing because it aspires to tell us how we can rebuild a movement that can win.”
—Van Jones

“McAlevey’s message—that unions alone give working people voice at the bargaining table and the ballot box—burns with conviction. She makes for bracing company in interesting times.”
—The Plain Dealer

“McAlevey burns with a passion for the cause”
—Keith Richmond, Tribune

“McAlevey promotes the concept of ‘whole worker’ organizing, which seeks to go beyond the ‘labor-community’ paradigm in a manner that recognizes that workers are rooted in, and not separate from, communities and also recognizes the value of bringing community organizing techniques into the realm of labor and vice versa.”
—Book News