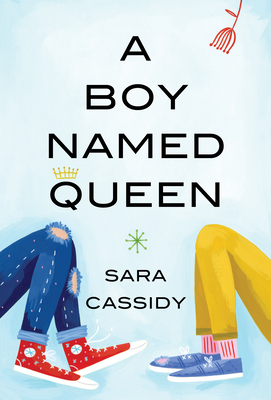 Queen, a new boy in Evelyn's grade five class, wears shiny gym shorts and wants to organize a chess/environment club. His father plays weird loud music and has tattoos. Evelyn is an only child with a strict routine and an even stricter mother. And yet in her quiet way she notices things.

How will the class react to Queen? How will Evelyn?

Evelyn takes particular notice of this boy named Queen. The way the bullies don't seem to faze him. The way he seems to live by his own rules. When it turns out that they take the same route home from school, Evelyn and Queen become friends, almost against Evelyn's better judgment. She even finds Queen irritating at times. Why doesn't he just shut up and stop attracting so much attention to himself?

Yet he is the most interesting person she has ever met. So when she receives a last-minute invitation to his birthday party, she knows she must somehow persuade her mother to let her go, even if it means ignoring the No Gifts request and shopping for what her mother considers to be an appropriate gift, appropriately wrapped with "boy" wrapping paper.

Her visit to Queen's house opens Evelyn's eyes to a whole new world, including an unconventional goody bag (leftover potato latkes wrapped in waxed paper and a pair of barely used red sneakers). And when it comes time for her to take something to school for Hype and Share, Evelyn suddenly looks at her chosen offering -- her mother's antique cream jug -- and sees new and marvelous possibilities.