Storm and Shelter: A Bluestocking Belles Collection With Friends (Paperback) 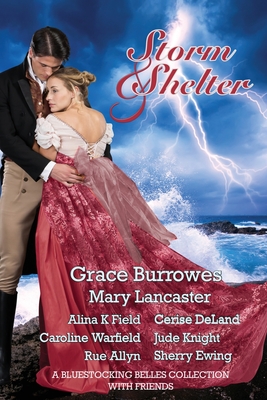 When a storm blows off the North Sea and slams into the village of Fenwick on Sea, the villagers prepare for the inevitable: shipwreck, flood, land slips, and stranded travelers. The Queen's Barque Inn quickly fills with the injured, the devious, and the lonely. Intrigue crackles through the village, and passion lights up the hotel. One storm, eight authors, eight heartwarming novellas.

When Letty's ship founders in a violent storm, she forges a rare bond with her rescuer.

Simon is a troubled man on a final, deadly mission-until Letty makes him question everything. Hiding in plain sight among the refugees at The Queen's Barque, Simon is more than capable of protecting them both. But when the floods recede, can either of them say goodbye?

Josephine is so young. In love with life. His accountant in his work for Whitehall. Her father's heir to his trading company-and his espionage network.

Lord Stanton cannot resist marrying her. Far from home, amid a horrific storm, Stanton discovers that his new bride loves him dearly.

Zach knows Patience is far above his touch. But he has been enchanted by her since she raced out of the storm and into the Queen's Barque with a wagon full of small boys, puppies, and a bag of books. When the two of them make their way across the flooded marsh in search of a missing boy, attraction deepens. She risks scandal; he risks his heart.

Before I Found You: Sherry Ewing

Miranda has only one goal in life: to find a rich husband who can change her status from Miss to My Lady.

Jasper has no plans to become infatuated during a chance encounter.

Their connection is hard to dismiss, despite Miranda's quest for a title at all cost. What if the cost includes love?

Malcolm rescues a French lady smuggler from the surf during a devastating storm, and takes shelter with her. As the stormy night drags on, he suspects his companion knows the woman who holds the secret to his identity. When she admits who she is, she dashes all his hopes- and promises him new ones.

Wait for Me: Rue Allyn

Enemies by nature- Esmeralda and Brandon have met and fought before.

When a fierce storm creates a chance encounter and forced proximity, Brandon learns the pirate is a woman of serious honor. Esmeralda discovers the naval captain is more than a uniform stuffed with rules. Both love the sea with boundless passion, but can they love each other?

Vicar to a remote parish, Barnaby Somerville stretches his tiny stipend to adopt his orphaned niece and nephew and his time to offer medical care as well as spiritual. A wife is a dream he cannot afford.

But the storm sweeps into his life a surprising temptation. God knows, he will forever be richer for having known Theodosia Conroy, even if he must let her go.

A Kiss by the Sea: Grace Burrowes

Thaddeus Pennrith finds a way to recover from multiple griefs when he accepts the blacksmith's post at Fenwick on Sea. Village life gives him a sense of belonging that Polite Society never could, though he must resume his aristocratic responsibilities soon. Along comes Lady Sarah Weatherby, refugee from an engagement gone badly awry, and Thaddeus is faced with both a compelling reason to reveal his titled antecedents, and a longing to keep them forever hidden....