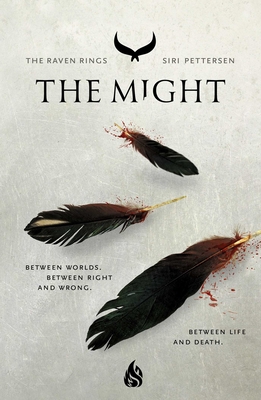 THE MIGHT is the furious conclusion to the fantasy epic THE RAVEN RINGS and is about the search for one's own roots, prejudices, power struggles, arrogance and love.

I loved (Odin's Child) deeply from the first to the last word, and was instantly and thoroughly immersed. -- Laini Taylor, bestselling author of Daughter of Smoke and Bone.

...The story examines and upends everything its characters believe in, including their world, their history, their faith, and themselves, while intertwining elements of politics and Norse mythology with a side of forbidden romance. Kirkus Reviews

The intrigue, scope, and depth of His Dark Materials, set in an immersive Nordic world as fierce and unforgettable as its characters.  Rosaria Munda, author Fireborne/Flamefall - Aurelian Cycle

HIrka has been sent to the world of the blind, a powerful and immortal people whom she has been taught to fear since infancy--and who now see her as their only chance to reignite a thousand-year-old war. The blind will use Hirka's ability to travel between worlds to return to Ym, the land where Hirka grew up and where the blind were betrayed all those years ago. And this time, they will prevail.

Hirka is torn between her loyalties to the people who birthed her and the people who raised her, between the savior she is expected to be and the individual she wants to be. And every choice she makes pulls her further away from Rime, the love of her life, who is doing everything he can to stop Ym from falling to pieces all around him.

A million things stand between Hirka and Rime. But only together can they stop the end of the worlds.

Siri Pettersen made her sensational debut in 2013 with the Norwegian publication of Odin's Child, the first book in The Raven Rings trilogy, which has earned numerous awards and nomiations at home and abroad. Siri has a background as a designer and comics createor. Her roots are in Finnsnes and Trondheim, but she now lives in Oslo, where you're likely to find her in a coffee shop. According to fellow writers, her superpower is "mega-motivation"--the ability to inspire other creative souls.

The conclusion to the Raven Rings trilogy sees the brewing of a war 1,000 years in the making.

Hirka crossed over from contemporary Earth into Dreysíl and hopes to finally meet her blood family in the land of her father, Graal. In the place where the deadborn live in a strict, hierarchical society, she must once again carve a place for herself while her relatives plot an invasion of her home world in search of the Might. Meanwhile, Rime makes his way back to Ym only to find everything changed, his position as Ravenbearer compromised, and his few allies diminished in number and power. As Rime struggles to stop Graal and his invading horde and Hirka seeks a peaceful solution as well as a way to save Rime’s life, they desperately forge a path toward one another. This fantastic follow-up to The Rot (2021), translated from the original Norwegian, delves further into the mythology of its parallel worlds, the power of the Might, and a character-driven exploration of the intersections of power, identity, and belonging. Moments of repetitive internal monologue seep into an otherwise strong narrative in which the two protagonists experience significant growth as they find their footing in an unforgiving world during their search for answers, peace, and, ultimately, love. The main characters are White.