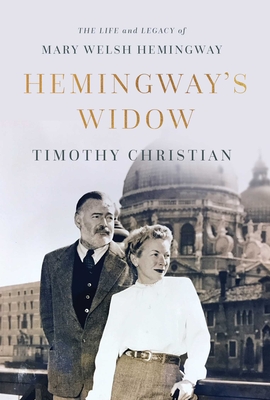 A stunning portrait of the complicated woman who becomes Ernest Hemingway's fourth wife, tracing her adventures before she meets Ernest, exploring the tumultuous years of their marriage, and evoking her merry widowhood as she shapes Hemingway's literary legacy.

Mary Welsh, a celebrated wartime journalist during the London Blitz and the liberation of Paris, meets Ernest Hemingway in May 1944. He becomes so infatuated with Mary that he asks her to marry him the third time they meet—although they are married to other people.  Eventually, she succumbs to Ernest's campaign, and in the last days of the war joined him at his estate in Cuba.

Through Mary's eyes, we see Ernest Hemingway in a fresh light.  Their turbulent marriage survives his cruelty and abuse, perhaps because of their sexual compatibility and her essential contribution to his writing.  She reads and types his work each day—and makes plot suggestions.  She becomes crucial to his work and he depends upon her critical reading of his work to know if he has it right.

We watch the Hemingways as they travel to the ski country of the Dolomites, commute to Harry's Bar in Venice; attend bullfights in Pamplona and Madrid; go on safari in Kenya in the thick of the Mau Mau Rebellion; and fish the blue waters of the gulf stream off Cuba in Ernest's beloved boat Pilar.  We see Ernest fall in love with a teenaged Italian countess and wonder at Mary's tolerance of the affair.

We witness Ernest's sad decline and Mary's efforts to avoid the stigma of suicide by claiming his death was an accident.  In the years following Ernest's death, Mary devotes herself to his literary legacy, negotiating with Castro to reclaim Ernest's manuscripts from Cuba, publishing one-third of his work posthumously.  She supervises Carlos Baker's biography of Ernest, sues A. E. Hotchner to try and prevent him from telling the story of Ernest's mental decline, and spends years writing her memoir in her penthouse overlooking the New York skyline.

Her story is one of an opinionated woman who smokes Camels, drinks gin, swears like a man, sings like Edith Piaf, loves passionately, and experiments with gender fluidity in her extraordinary life with Ernest.  This true story reads like a novel—and the reader will be hard pressed not to fall for Mary.

Timothy Christian graduated as a Commonwealth Scholar from King’s College, Cambridge. During a varied legal career, he served as a law professor and Dean at the Faculty of Law at the University of Alberta and a visiting professor in Japan and Taiwan. Christian read A Moveable Feast in the cafes of Aix-en-Provence when he was a young man studying French. Realizing that no one had written deeply about Mary Welsh Hemingway, Christian began researching her story–and discovered a woman vital to Hemingway’s art.  Christian is married to a lawyer and abstract artist, Kathryn Dykstra, and lives in a Mediterranean microclimate on Vancouver Island’s beautiful Saanich Inlet

"A vivid portrayal of Mary Walsh Hemingway. Christian masterfully transports readers to Picasso's studio in Paris and to the Ritz Bar where the couple drank with Jean-Paul Sartre and Simone de Beauvoir.Christian regales readers with stories from around the world, revealing the life of one of the most iconic literary couples. He also chronicles Mary's illustrious journalism career and her meetings with world leaders such as Fidel Castro and John F. Kennedy, setting the record straight that Martha Gellhorn was not the only respected reporter whom Hemingway married."
— Wayne Catan

“Illuminating. I cannot imagine any biographer navigating these waters better than Timothy Christian has done in these pages. And I hope every student of Hemingway will pay close attention and adjust accordingly their views of Carlos Baker's biography of Hemingway. Again, I say this book is a stunning achievement. It is the custom to say that this volume belongs on the bookshelf of every scholar and student and fan of Hemingway. And it does. This includes Hemingway aficionados, who will appreciate Timothy Christian's superb skills in biography. This is the Hemingway book we've all been waiting for so long.”
— H. R. Stoneback, Distinguished Professor Emeritus, The State University of New York; President (past): The Ernest Hemingway Foundation & Society

"This compelling book transported me back to Hemingway’s world, except this time his fourth and last wife Mary was guiding the way. Hemingway aficionados will enjoy the journey. Hemingway scholars will appreciate the detail, including some new revelations, and the fresh analysis of her life and legacy. Bottom line: an important book that fills a long-standing gap and is a pleasure to read."
— Nick Reynolds, author of the New York Times bestseller 'Writer, Sailor, Soldier, Spy: Ernest Hemingway's Secret Adventures, 1935-1961'

"Timothy Christian has spent years researching Mary's life across continents and every archive, including troves of information that no one else has tapped. To this task, he brought a sympathetic attachment to the woman behind the Hemingway myth. He has turned up truly fresh and significant information about Mary herself and her life before Ernest, about the courtship and sexual predilections of the couple, and about Ernest's suicide. While to some extent this story will compromise the myth of the great macho man that was important to Hemingway—a myth that Mary helped craft and maintain—it will ultimately provide a fuller understanding of an American icon and the lives he touched. Refreshingly, Christian does not view Mary as a victim, despite Ernest's callous and violent treatment of the talented journalist who spent her prime years with the aging and difficult master. Christian gives us Mary, a tiny and fearless dynamo, a woman of skill and heart, calculation and vulnerability, who knew exactly what she was getting into when she married Ernest—and played her hands as best as she could, even as her choices narrowed.”
— Carol Sklenicka, author of 'Raymond Carver: A Writer's Life' and 'Alice Adams: Portrait of a Writer'

“Sixty years after Hemingway's death, Christian sets the record straight regarding Mary Hemingway's complex relationship with Hemingway and his art during and after his final years.  Often stereotyped as accepting a sometimes abusive relationship, Mary comes powerfully to life in this intricately nuanced and mesmerizing biographical tour de force.  Honest, unafraid and compelling, Christian finally gives us the true gen.”
— Linda Patterson Miller, Author of 'Letters from the Lost Generation' and Head of the Editorial Board, The Hemingway Letters Project

"Living with Hemingway could be downright treacherous, as the journalist Mary Welsh would learn even before becoming the great writer’s fourth and last wife. In this fast-paced, drama-packed, and full-bodied biography, Timothy Christian has given us the absolute true gem of a woman who sacrificed her own identity while navigating a partnership forged by careless love and deep darkness. Drawn from Mary Hemingway’s journals and other previously untapped sources, Hemingway’s Widow adds valuable new dimensions and insights to a story we thought we already knew.”
— Steve Paul, author of Hemingway at Eighteen: The Pivotal Year That Launched an American Legend"

"Bravo to Tim Christian for creating a portrait of my friend Mary Hemingway that at last shows her for the complex person she was—so much more than an appendage of 'the great man.’ The author’s astonishingly deep research into the vast archive of letters, journals, memoirs, interviews allows him to put the fascinated reader into Mary’s thoughts and feelings as she navigated the sometimes glamourous and often treacherous shoals of life with Ernest. This is a story that needed to be told and we are fortunate that Tim Christian has told it so frankly, so sympathetically, and so compellingly.”
— Susan Buckley, author of Eating with Peter

"This portrait of Mary Welsh Hemingway documents her first encounter with Ernest Hemingway while she was working as a wartime correspondent and chronicles their tumultuous relationship, travels around the world and her life after Hemingway’s suicide."
— The New York Times Book Review

"We now have a book that virtually closes the circle on Hemingway’s women, a biography that will be treasured by the author’s fans and scholars. Scenes of London during World War II are exciting and interesting as we see Mary grow to become a respected reporter, no mean task for a woman at that time. Christian presents a vivid picture, plunging the reader into their daily life, the visits from friends and frenemies, Ernest’s work on The Old Man and the Sea and Mary’s assistance. We feel Mary’s claustrophobia when Ernest becomes cruel and abusive, we are privy to their sexual games, we revel in their travels to Africa and Europe, we wince watching Mary’s unbelievable patience when Ernest 'falls in love' with an Italian woman young enough to be his grandchild."
— Roberta Silman