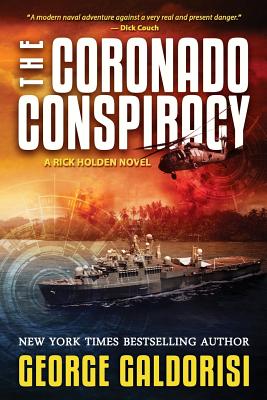 Off the shore of Costa Rica, the Navy command ship USS Coronado launches an all-out assault against one of the most powerful drug lords in Central America. The strike force is in position; the Blackhawks are armed and airborne, and the high-tech fist of the U.S. military is poised to come down like a sledgehammer. Everything is going according to plan until the quiet jungle erupts in a chaos of blood, shrapnel, and fire.

When CIA Operative Rick Holden and Naval Intelligence Officer Laura Peters begin investigating the circumstances of the ambush, they uncover something much more sinister than a failed military operation. There's a conspiracy at the very heart of the American government.

And bringing down the President of the United States is only the first step...

GEORGE GALDORISI is a career naval aviator. His thirty years of active duty service included four command tours and five years as a carrier strike group chief of staff. In addition to his Rick Holden thrillers, he has written several bestselling novels in the rebooted Tom Clancy's Op-Center series, including Out of the Ashes, Into the Fire, Scorched Earth, and Dark Zone. With his longtime collaborator, Dick Couch, he also coauthored the New York Times best seller, Tom Clancy Presents: Act of Valor. He is also the author of The Kissing Sailor, which proved the identity of the two principals in Alfred Eisenstaedt's famous photograph; as well as over 400 articles in professional journals and other media. He is the Director of Strategic Futures and Technical Assessments at the Navy's Command and Control Center of Excellence in San Diego, California. He and his wife Becky live in Coronado, California.