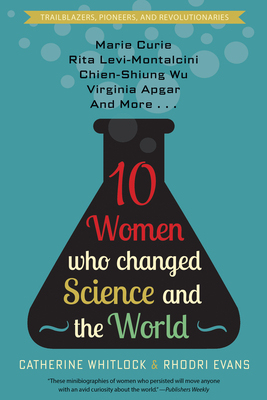 By Catherine Whitlock, Rhodri Evans
$26.99
Have a question? Please let us know and we will reply as soon as we can. Thanks!

From two-time Nobel Prize winner Marie Curie to physicist Chien-Shiung Wu and obstetrical anesthesiologist Virginia Apgar, M.D., this book celebrates the lives and hard-earned accomplishments of ten women from around the world who forever changed astronomy, physics, chemistry, medicine, and biology. These minibiographies of women who persisted will move anyone with an avid curiosity about the world. -Publishers Weekly It has been more than a century since the Nobel Prize in science was first awarded to a woman. And after Marie Curie's 1911 accolade, seventeen other women--including two in 2018--have been so honored (Curie won the award a second time). This book explores the lives of Curie, three other female Nobel Prize winners, and six other women who broke through gender discrimination in a variety of fields to help shape our world with their extraordinary discoveries and inventions. What drove these remarkable women to cure previously incurable diseases, disprove existing theories, or identify new sources of energy? Despite living during periods when the contribution of women was often disregarded, if not ignored, these resilient women persevered with their research. By daring to ask "How?" and "Why?" and laboring against the odds, each of these women, in her own way, made the world a better place.