Miles & Me: Miles Davis, the man, the musician, and his friendship with the journalist and poet Quincy Troupe (Paperback) 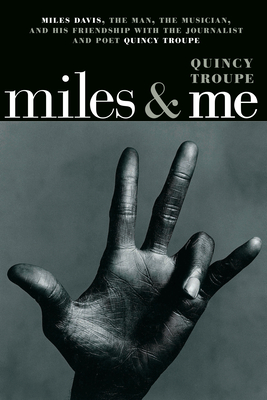 By Quincy Troupe
$15.95
On Our Shelves Now (Please contact store to confirm availability)

Poet, activist, and journalist Quincy Troupe's candid account of his friendship with Miles Davis is a revealing portrait of a great musician and an engrossing chronicle of the author's own artistic and personal growth. Miles & Me describes in intimate detail the sometimes harrowing processes of Davis's spectacular creativity and the joys and travails Davis's passionate and contradictory temperament posed to the two men's friendship. Miles & Me shows how Davis, both as an artist and as a black man, influenced Troupe and whole generations of Americans while forever changing the face of jazz.

With a new introduction by film producer Rudy Langlais, an original photo essay of Miles and Quincy together by Jon Stevens, and a new Q&A with Quincy Troupe about how—and why—he came to write Miles & Me.

Poet, teacher, journalist Quincy Troupe is an alumnus of the Watts Writers Workshop and, along with his friends Ishmael Reed, Amiri Baraka, Nikki Giovanni and others, associated with the Black Arts Movement. He was named California's first poet laureate in 2002. Troupe's Miles: The Autobiography is considered a contemporary classic of musical artist biography. Among his many other books are his collaboration on the autobiography of Chris Gardner, The Pursuit of Happyness, which became a popular film starring Will Smith. He also wrote James Baldwin: The Legacy and Earl the Pearl: My Story by Earl Monroe and Quincy Troupe. Troupe has published many volumes of his poetry over the years and has also published several children's books.

"Brilliant, poetic, provocative, Quincy Troupe's Miles and Me reveals the man behind the dark glasses and legend."  —Ishmael Reed

"Using refreshingly unscholarly language, poet and literature professor Troupe paints an aptly minimalist portrait of the artist as a man-child in both his musical curiosity and his irrational tantrums. Miles and Me is witheringly honest and deeply perceptive. A must-read for Davis devotees." —Entertainment Weekly

"[Troupe] gives the stories behind the collaboration, from his own introduction to Davis's music in the1950s—and to Davis's stature as 'an unreconstructed black man'—up to Davis's death in 1991..." —The New York Times Book Review

"Troupe is a wonderfully astute judge of human behavior and brings a poet's acuteness of vision to depicting Davis's aura of intimidation and kingly power. He is also well aware of Davis's deeply felt loneliness, the terrible solitude of genius." —Kirkus Reviews

"It has been said that Miles Davis was a great poet on his instrument. In a similar vein, it can be said that Quincy Troupe is a great instrument in his poetic delivery. As fate would have it, these two very talented individuals would form a mutual and intriguing bond. Miles and Me, Quincy Troupe's latest book, is a honest, serious and sometimes hilarious memoir of his warm and cherished friendship with Miles Davis." —Larvester Gaither, QBR The Black Book Review