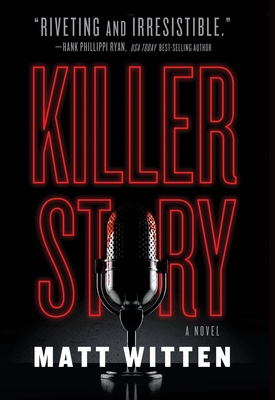 How far will she go to catch the killer—and make her podcast a hit?

Talented and idealistic young reporter Petra Kovach is on the brink of being laid off from her third failing newspaper in a row. To save her job, she pitches the launch of a true crime podcast about a sensational, unsolved murder.

Years earlier, an alt-right YouTuber was killed in her Harvard dorm room, and the case went cold. Petra knew the victim—she was once her camp counselor and loved her like a little sister, despite their political differences.

Petra’s investigation gets off to a rocky start, as her promising leads quickly shrivel up. In her passionate quest for justice—and clicks—Petra burns sources and breaks laws, ultimately putting her own life on the line. Even as her star rises, she worries it could all come crashing down at any moment if her actions are exposed.

When her machinations start to backfire, there’s only one way to fix everything and solve the murder—even though it may cost her everything she loves.

Perfect for fans of Karin Slaughter and Harlan Coben

Matt Witten is a TV writer, novelist, playwright, and screenwriter. His television writing includes such shows as House, Pretty Little Liars, and Law & Order. His TV scripts have been nominated for an Emmy and two Edgars, and he has written four mystery novels, winning a Malice Domestic award for best debut novel. He has also written stage plays that have been produced throughout the world.

His previous novel, The Necklace, has been optioned for film by Appian Way and Cartel Pictures, with Leonardo DiCaprio attached as producer. Killer Story is his most recent novel.

“I devoured Killer Story! I was gripped by journalist Petra Kovach's passionate mission to discover the truth behind her young friend’s murder. An absorbing, twisty thriller you'll want to read in one sitting.” —Alice Hunter, best-selling author

“Killer Story reveals that the all-consuming, addictive quest for clicks is the new crack, and so is Matt Witten's propulsive storytelling. You won't be able to tear yourself away.” —Lee Goldberg, New York Times best-selling author

“[The Necklace] is as fast and tense as a great thriller should be, but it's full of warmth and humanity too—one small-town woman's quest for the most poignant kind of justice you could imagine. Buy it today and read it tonight!” —Lee Child, New York Times best-selling author

“A slick, smart crime thriller for the internet age! As true crime podcasters, we couldn’t put down this dive into the exciting, seedy, and sometimes dangerous world of an infamous unsolved mystery! Killer Story reads like something out of a crime journalist’s fever dream—and it’s a must read for anyone who’s ever become obsessed with a case!” —The Murder Sheet Podcast

“Where does a true crime podcaster's allegiance lie? Telling the best story, solving the case, or protecting witnesses and abiding by the law? Killer Story puts you right at this crossroads . . . and on the edge of your seat!” —Cold Case: Frozen Tundra

“In [The Necklace], Witten keeps the reader guessing and the tension high. Fans of amateur investigators with a personal stake in the outcome will be rewarded.” —Publishers Weekly

“The Necklace is an addictively readable story of a mother’s quest for justice. Surprising, propulsive, and poignant. I inhaled this novel.” —Meg Gardiner, Edgar Award-winning author

“A high stakes drama that introduces us to a heroine with an honorable streak that runs bone deep. The subject matter is gut-wrenching and thought provoking, the entire tale laced with a haunting eeriness. Matt Witten is a pro, and this gem of a thriller is proof positive of that.” —Steve Berry, New York Times best-selling author

“I devoured The Necklace in a single evening, drawn in by Matt Witten's fantastically drawn characters and intricate mystery . . . A must-read.” —Hollie Overton, international best-selling author

“A pulse-pounder with heart, a heartbreaker full of thrills, a thriller with a true sense of place—with The Necklace, Matt Witten knocks one out of the park.” —S. J. Rozan, Edgar Award-winning author

“Great characters, fast-paced, and a twisty plot. The Necklace is what a thriller should be.” —D. P. Lyle, Macavity and Benjamin Franklin Award-winning author