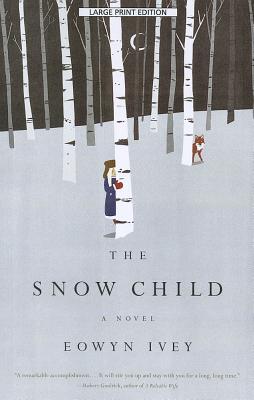 By Eowyn Ivey
This title is not available for purchase.
Out of Print

Alaska, 1920: a brutal place to homestead, and especially tough for recent arrivals Jack and Mabel. Childless, they are drifting apart--he breaking under the weight of the work of the farm; she crumbling from loneliness and despair. In a moment of levity during the season's first snowfall, they build a child out of snow. The next morning the snow child is gone--but they glimpse a young, blonde-haired girl running through the trees. This little girl, who calls herself Faina, seems to be a child of the woods. She hunts with a red fox at her side, skims lightly across the snow, and somehow survives alone in the Alaskan wilderness. As Jack and Mabel struggle to understand this child who could have stepped from the pages of a fairy tale, they come to love her as their own daughter. But in this beautiful, violent place things are rarely as they appear, and what they eventually learn about Faina will transform all of them.

Eowyn LeMay Ivey was raised in Alaska and continues to live there with her husband and two daughters. She received her BA in journalism and minor in creative writing through the honors program at Western Washington University, studied creative nonfiction at the University of Alaska Anchorage graduate program, and worked for nearly 10 years as an award-winning reporter at the Frontiersman newspaper. This is her first novel.