A Monk Swimming: A Memoir by Malachy McCourt (Paperback) 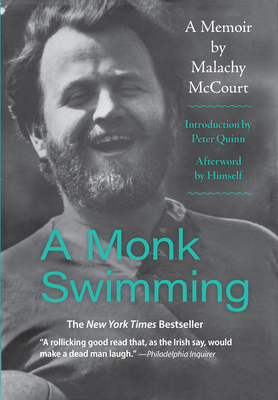 BACK IN PRINT "A rollicking good read that, as the Irish say, would make a dead man laugh." --Philadelphia InquirerMalachy McCourt was already famous as an actor, saloon-keeper, and late-night television personality when Angela's Ashes was published. Brother Frank's book introduced the incorrigible, indomitable young Malachy to a worldwide audience that was charmed, and clamored for more.Frank's book was a hard act to follow, but Malachy's delightful memoir, which picked up where Angela's Ashes left off, won critical acclaim and commercial success.Born in Brooklyn, and raised in the lanes of Limerick, Malachy returned to New York in 1952, at age 20. After stints in the Air Force and as a longshoreman, he parlayed his gifts of gab and conviviality into an ownership position at Malachy's--the first singles' bar--located around the corner from the Barbizon Hotel for young women, whose glamorous residents frequently repaired to Malachy's for a tipple and flirt.Malachy's madcap, manic life ricocheted from higher highs to lower lows as he tried selling Bibles at the beach on Fire Island and smuggling gold in Zurich. He entertained a voracious public on the stage as a member of the Irish Players and was a semi-regular on the Tonight Show with Jack Paar. In these years, he was almost always drunk, almost always chasing (or being chased) by women. His gifts for language and storytelling are so well honed that when you read A Monk Swimming, "You'll laugh uncontrollably . . . You're in the grip of a master raconteur" (Houston Chronicle).Now the last of the McCourts of Limerick, Malachy reflects on the tumultuous events of the twenty-five years since he wrote A MONK SWIMMING in his Afterword."Read it and weep: they don't make lives like this anymore." -The Irish Voice.

Malachy McCourt, star of film, stage, television, and radio was awarded the Irish American Writers and Artists (IAW&A) Eugene O'Neill Lifetime Achievement Award in 2016. The Irish Echo designated him "The Great Sennachie," in 2021.Mayor Bill de Blasio declared March 17, 2021, as Malachy McCourt Day in New York City, where he lives.Peter Quinn is a novelist, political historian, and foremost chronicler of New York City. He is the author of Looking for Jimmy: In Search of Irish America and a trilogy of historical detective novels--Hour of the Cat, The Man Who Never Returned, and Dry Bones.