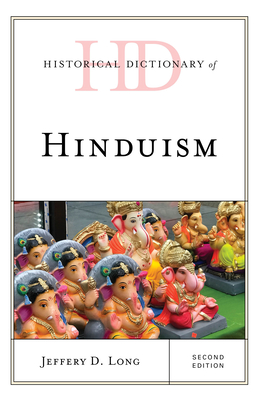 By Jeffery D. Long
This title is not available for purchase.

Hinduism is the world's third largest and most ancient religion. The scope of this book ranges from the ancient history of Hinduism to the contemporary issues that Hindus face today. It explores the Hindu history, society, philosophy, theology, and culture. In addition to Hinduism, this book also touches upon religious traditions with which Hindus have had extensive interaction, such as Jainism, Buddhism, Sikhism, Christianity, Islam, and Zoroastrianism. This second edition of Historical Dictionary of Hinduism contains a chronology, an introduction, and an extensive bibliography. The dictionary section has over 1,000 cross-referenced entries on deities, historical figures, festivals, philosophical terms, ritual implements, and much more. This book is an excellent resource for students, researchers, and anyone wanting to know more about Hinduism.

Jeffery D. Long is Professor of Religion and Asian Studies at Elizabethtown College, in Elizabethtown, Pennsylvania, where he has taught since receiving his doctoral degree from the University of Chicago Divinity School in the year 2000. An author, co-author, and editor of an array of books and articles, he has spoken in a wide range national and international venues, including the United Nations. In 2018, he received the Hindu American Foundation's Dharma Seva Award for his efforts to promote more accurate and culturally sensitive portrayals of Hindu traditions in the American educational system and popular media.