The Founders' Fortunes: How Money Shaped the Birth of America (Hardcover) 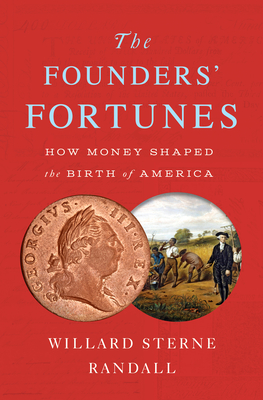 An illuminating financial history of the Founding Fathers, revealing how their personal finances shaped the Constitution and the new nation

In 1776, upon the signing of the Declaration of Independence, the Founding Fathers concluded America’s most consequential document with a curious note, pledging “our lives, our fortunes and our sacred honor.” Lives and honor did indeed hang in the balance, yet just what were their fortunes? How much did the Founders stand to gain or lose through independence? And what lingering consequences did their respective financial stakes have on liberty, justice, and the fate of the fledgling United States of America?

In this landmark account, historian Willard Sterne Randall investigates the private financial affairs of the Founders, illuminating like never before how and why the Revolution came about. The Founders’ Fortunes uncovers how these leaders waged war, crafted a constitution, and forged a new nation influenced in part by their own financial interests. In an era where these very issues have become daily national questions, the result is a remarkable and insightful new understanding of our nation’s bedrock values.

Willard Sterne Randall is a Distinguished Scholar in History and Professor Emeritus at Champlain College. Prior to academia, he worked for seventeen years as an investigative reporter—during which he garnered the National Magazine Award, the Hillman Prize, the Loeb Award, and the John Hancock Prize—eventually pursuing advanced studies in history at Princeton University. As a biographer and lecturer, he specializes in the history of the Founding Era.

“The narrative is well written and packed with human interest, providing a valuable update to the Revolutionary-era history many readers may not have studied since high school…A vivid history of how America paid for its Revolution and why the Founding Fathers made the decisions they did.”
—Kirkus, starred review

“The adage ‘follow the money’ was as true in the Revolutionary era as in our own. By examining the dollars-and-cents (or pounds-and-pence) side of events, Willard Sterne Randall offers a refreshing perspective on the nation’s founding. Translating values into our own currency gives us an appreciation of, for example, Ben Franklin’s $110,000 salary (in today’s dollars) as postmaster general; or Martha Custis’ nearly $4 million fortune when she married George Washington; to say nothing of the staggering British national debt of $20 trillion. The Founders’ Fortunes is an eminently readable book with the sharp vignettes and incisive character portraits that bring history to life.”
—Jack Kelly, author of Valcour: The 1776 Campaign That Saved the Cause of Liberty

“It is common knowledge that the finances of the United States at its founding were extremely shaky. Less well known is that the personal finances of many key Founders were also shaky. Willard Sterne Randall's study reveals the Founders’ fluid personal financial circumstances, and how those circumstances worked to shape the decisions they made as public servants. Randall extends and amplifies Charles Beard’s influential economic interpretation of the Constitution that launched ‘Progressive’ history-writing more than a century ago.”
—Richard Sylla, Professor Emeritus of Economics, New York University and Chairman of the Museum of American Finance (2010–2020)

“Historians have attributed the American Revolution to ideology, nationalism, and restless ambition, but in this thoughtful book Willard Sterne Randall reminds readers that the pursuit of economic gain was also a decisive motivating factor. Some merchants, land speculators, penniless lawyers, and debt-ridden office holders glimpsed a better material future through American independence, and some found that their dreams came true under the new national government in the 1790s. The Founders’ Fortunes is a rewarding reconsideration of the birth of the American nation, all the more so in this time of an enhanced awareness of our frayed social fabric and economic inequities.”
—John Ferling, author of Winning Independence: The Decisive Years of the Revolutionary War, 1778-1781