Scandinavia in the Age of Vikings (Hardcover) 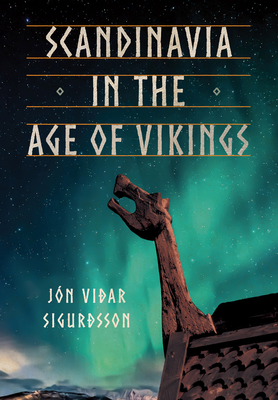 In Scandinavia in the Age of Vikings, J n Vi ar Sigur sson returns to the Viking homeland, Scandinavia, highlighting such key aspects of Viking life as power and politics, social and kinship networks, gifts and feasting, religious beliefs, women's roles, social classes, and the Viking economy, which included farming, iron mining and metalworking, and trade.

Drawing of the latest archeological research and on literary sources, namely the sagas, Sigur sson depicts a complex and surprisingly peaceful society that belies the popular image of Norsemen as bloodthirsty barbarians. Instead, Vikings often acted out power struggles symbolically, with local chieftains competing with each other through displays of wealth in the form of great feasts and gifts, rather than arms. At home, conspicuous consumption was a Viking leader's most important virtue; the brutality associated with them was largely wreaked abroad.

Sigur sson's engaging history of the Vikings at home begins by highlighting political developments in the region, detailing how Danish kings assumed ascendency over the region and the ways in which Viking friendship reinforced regional peace. Scandinavia in the Age of Vikings then discusses the importance of religion, first pagan and (beginning around 1000 A.D.) Christianity; the central role that women played in politics and war; and how the enormous wealth brought back to Scandinavia affected the social fabric--shedding new light on Viking society.