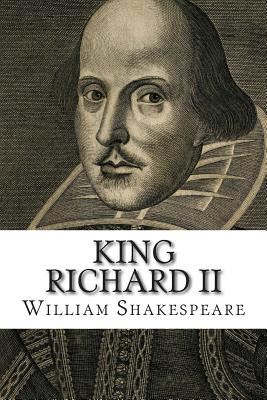 By William Shakespeare
$14.85
Have a question? Please let us know and we will reply as soon as we can. Thanks!

King Richard the Second is a history play by William Shakespeare believed to have been written in approximately 1595. It is based on the life of King Richard II of England (ruled 1377-1399) and is the first part of a tetralogy, referred to by some scholars as the Henriad, followed by three plays concerning Richard's successors: Henry IV, Part 1; Henry IV, Part 2; and Henry V. It may not have been written as a stand-alone work. Although the First Folio (1623) edition of Shakespeare's works lists the play as a history play, the earlier Quarto edition of 1597 calls it The tragedie of King Richard the second. The play spans only the last two years of Richard's life, from 1398 to 1400. The first Act begins with King Richard sitting majestically on his throne in full state. We learn that Henry Bolingbroke, Richard's cousin, is having a dispute with Thomas Mowbray, and they both want the king to act as judge. The subject of the quarrel is Bolingbroke's accusation that Mowbray had squandered monies given to him by Richard for the King's soldiers. Bolingbroke also accuses Mowbray of the recent murder of the Duke of Gloucester, although John of Gaunt-Gloucester's brother and Bolingbroke's father-believes that Richard himself was responsible for the murder. After several attempts to calm both men, Richard acquiesces and Bolingbroke and Mowbray challenge each other to a duel, over the objections of both Richard and Gaunt. The tournament scene is very formal with a long, ceremonial introduction. But Richard interrupts the duel at the very beginning and sentences both men to banishment from England. Bolingbroke is originally sentenced to leave for ten years, but Richard changes this to six years, whereas Mowbray is banished forever. The king's decision can be seen as the first mistake in a series that will lead eventually to his overthrow and death. Indeed, Mowbray predicts that the king will fall sooner or later at the hands of Bolingbroke. John of Gaunt dies and Richard II seizes all of his land and money. This angers the nobility, who accuse Richard of wasting England's money, of taking Gaunt's money (which rightfully belongs to Bolingbroke) to fund a war in Ireland, of taxing the commoners, and of fining the nobles for crimes their ancestors committed. Next, they help Bolingbroke secretly return to England and plan to overthrow Richard II. However, there remain some subjects faithful to Richard, among them Bushy, Bagot, Green and the Duke of Aumerle (son of the Duke of York), cousin of both Richard and Bolingbroke. King Richard leaves England to administer the war in Ireland, and Bolingbroke takes the opportunity to assemble an army and invade the north coast of England. He executes Bushy and Green, and wins over the Duke of York, whom Richard has left in charge of his government during his absence. When Richard returns, Bolingbroke first claims his land back but then additionally claims the throne. He crowns himself King Henry IV and Richard is taken into prison to the castle of Pomfret. Aumerle and others plan a rebellion against the new king, but York discovers his son's treachery and reveals it to Henry, who spares Aumerle as a result of the intercession of the Duchess of York but executes the other conspirators. After interpreting King Henry's "living fear" as a reference to the still-living Richard, an ambitious nobleman (Exton) goes to the prison and murders the former king. King Henry repudiates the murderer and vows to journey to Jerusalem to cleanse himself of his part in Richard's death.

William Shakespeare (26 April 1564 (baptised) - 23 April 1616) was an English poet, playwright and actor, widely regarded as the greatest writer in the English language and the world's pre-eminent dramatist. He is often called England's national poet and the "Bard of Avon." His extant works, including some collaborations, consist of about 38 plays, 154 sonnets, two long narrative poems, and a few other verses, the authorship of some of which is uncertain. His plays have been translated into every major living language and are performed more often than those of any other playwright. Shakespeare was born and brought up in Stratford-upon-Avon. At the age of 18, he married Anne Hathaway, with whom he had three children: Susanna, and twins Hamnet and Judith. Between 1585 and 1592, he began a successful career in London as an actor, writer, and part-owner of a playing company called the Lord Chamberlain's Men, later known as the King's Men. He appears to have retired to Stratford around 1613 at age 49, where he died three years later. Few records of Shakespeare's private life survive, and there has been considerable speculation about such matters as his physical appearance, sexuality, religious beliefs, and whether the works attributed to him were written by others. Shakespeare produced most of his known work between 1589 and 1613. His early plays were mainly comedies and histories and these works remain regarded as some the best work produced in these genres even today. He then wrote mainly tragedies until about 1608, including Hamlet, King Lear, Othello, and Macbeth, considered some of the finest works in the English language. In his last phase, he wrote tragicomedies, also known as romances, and collaborated with other playwrights. Many of his plays were published in editions of varying quality and accuracy during his lifetime. In 1623, John Heminges and Henry Condell, two friends and fellow actors of Shakespeare, published the First Folio, a collected edition of his dramatic works that included all but two of the plays now recognised as Shakespeare's. It was prefaced with a poem by Ben Jonson, in which Shakespeare is hailed, presciently, as "not of an age, but for all time." Shakespeare was a respected poet and playwright in his own day, but his reputation did not rise to its present heights until the 19th century.