Conservatism: An Invitation to the Great Tradition (CD-Audio) 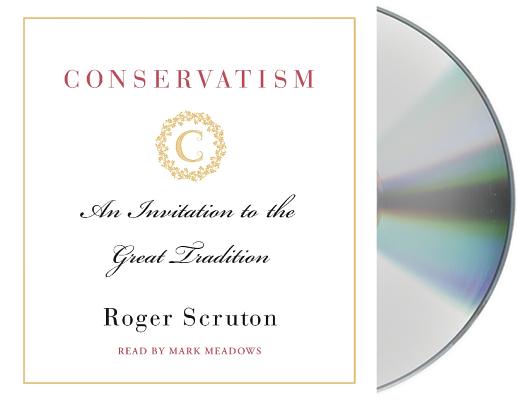 By Roger Scruton, Mark Meadows (Read by)
$28.99
Have a question? Please let us know and we will reply as soon as we can. Thanks!

This program includes an introduction read by the author.

A brief, magisterial audiobook introduction to the conservative tradition by one of Britain’s leading intellectuals.

In Conservatism, Roger Scruton offers listeners an invitation into the world of political philosophy by explaining the history and evolution of the conservative movement over the centuries. With the clarity and authority of a gifted teacher, he discusses the ideology's perspective on civil society, the rule of law, freedom, morality, property, rights, and the role of the state. In a time when many claim that conservatives lack a unified intellectual belief system, this book makes a very strong case to the contrary, one that politically-minded listeners will find compelling and refreshing.

Scruton analyzes the origins and development of conservatism through the philosophies and thoughts of John Locke, Thomas Hobbes, David Hume, Edmund Burke, Adam Smith, John Stuart Mill, Friedrich Hayek, and Milton Friedman, among others. He shows how conservative ideas have influenced the political sector through the careers of a diverse cast of politicians, such as Thomas Jefferson, Benjamin Disraeli, Calvin Coolidge, Winston Churchill, Ronald Reagan and Margaret Thatcher. He also takes a close look at the changing relationship between conservative politics, capitalism, and free markets in both the UK and the US.

This clear, incisive guide is essential listening for anyone wishing to understand Western politics and policies, now and over the last three centuries.

Sir ROGER SCRUTON is a writer and philosopher who has published more than forty books in philosophy and politics, including Kant and An Intelligent Person's Guide to Philosophy. He is widely translated. He is a fellow of the British Academy and a Fellow of the Royal Society of Literature. He teaches in both England and America and is a Senior Fellow at the Ethics and Public Policy Center, Washington D.C. He is currently teaching an MA in Philosophy for the University of Buckingham.