Colossus: Hoover Dam and the Making of the American Century (Hardcover) 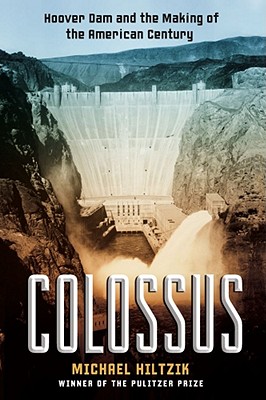 As breathtaking today as the day it was completed, Hoover Dam not only shaped the American West but helped launch the American century. In the depths of the Great Depression it became a symbol of American resilience and ingenuity in the face of crisis, putting thousands of men to work in a remote desert canyon and bringing unruly nature to heel.

Pulitzer Prize–winning writer Michael Hiltzik uses the saga of the dam’s conception, design, and construction to tell the broader story of America’s efforts to come to grips with titanic social, economic, and natural forces. For embodied in the dam’s striking machine-age form is the fundamental transformation the Depression wrought in the nation’s very culture—the shift from the concept of rugged individualism rooted in the frontier days of the nineteenth century to the principle of shared enterprise and communal support that would build the America we know today. In the process, the unprecedented effort to corral the raging Colorado River evolved from a regional construction project launched by a Republican president into the New Deal’s outstanding—and enduring—symbol of national pride.

Yet the story of Hoover Dam has a darker side. Its construction was a gargantuan engineering feat achieved at great human cost, its progress marred by the abuse of a desperate labor force. The water and power it made available spurred the development of such great western metropolises as Los Angeles, Phoenix, Denver, Las Vegas, Salt Lake City, and San Diego, but the vision of unlimited growth held dear by its designers and builders is fast turning into a mirage.

In Hiltzik’s hands, the players in this epic historical tale spring vividly to life: President Theodore Roosevelt, who conceived the project; William Mulholland, Southern California’s great builder of water works, who urged the dam upon a reluctant Congress; Herbert Hoover, who gave the dam his name though he initially opposed its construction; Frank Crowe, the dam’s renowned master builder, who pushed his men mercilessly to raise the beautiful concrete rampart in an inhospitable desert gorge. Finally there is Franklin Roosevelt, who presided over the ultimate completion of the project and claimed the credit for it. Hiltzik combines exhaustive research, trenchant observation, and unforgettable storytelling to shed new light on a major turning point of twentieth-century history.

“Masterly. In the grand tradition of David McCullough. [Hiltzik] fixes the endeavor in its time and captures the personalities of the people involved. May inspire in readers a longing for something…that will summon up once again America's famous self-confidence and daring.”—John Steele Gordon, Wall Street Journal


“Hiltzik tells the dam's tale well, with majestic sweep and a degree of detail that by rights ought to be numbing, but isn't; every iota of material fits snugly into the narrative, which, unlike the river, flows freely.” —San Francisco Chronicle

“[COLOSSUS is a] detailed and vividly written study – destined to be the standard history for decades to come.” —Washington Post

“The parade of grim particulars might make Colossus a depressing read were it not for the vigor of Hiltzik's prose and the lively gallery of individual portraits and anecdotes that convey a wonderfully textured sense of what it was like to work on Hoover Dam.”—Los Angeles Times

"Fascinating. A construction epic..of a beautiful immensity, a piece of infrastructure without compare..reflecting Depression-era America [and] astutely conveying the characters of its creators. Hiltzik marvelously captures the times of the Hoover Dam." — Booklist