You Will Be Safe Here (Paperback) 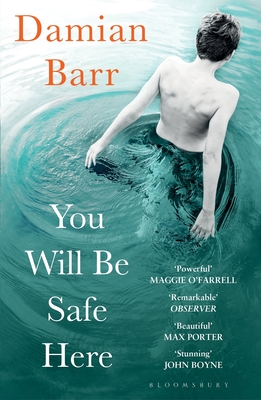 A beautiful and heart-breaking story set in South Africa where two mothers - a century apart - must fight for their sons, unaware their fates are inextricably linked.

Orange Free State, 1901. At the height of the Boer War, Sarah van der Watt and her six-year-old son Fred can only watch as the British burn their farm. The polite invaders cart them off to Bloemfontein Concentration Camp promising you will be safe here.

Johannesburg, 2010. Sixteen-year-old Willem is an outsider who just wants to be left alone with his Harry Potter books and Britney, his beloved pug. Worried he's turning out soft, his Ma and her new boyfriend send him to New Dawn Safari Camp, where they 'make men out of boys.' Guaranteed.

The red earth of the veldt keeps countless secrets whether beaten by the blistering sun or stretching out beneath starlit stillness. But no secret can stay buried forever.

Damian Barr is an award-winning writer and columnist. Maggie & Me, his memoir about coming of age and coming out in Thatcher's Britain, was a BBC Radio 4 Book of the Week and Sunday Times Memoir of the Year, and won the Paddy Power Political Books 'Satire' Award and Stonewall Writer of the Year Award. Damian writes columns for the Big Issue and High Life and often appears on BBC Radio 4. He is creator and host of his own Literary Salon that premieres work from established and emerging writers. You Will Be Safe Here is his debut novel. Damian Barr lives in Brighton.

“An incredible novel” —NATALIE HAYNES, i

“Epic … Immersive, moving, horrifying and beautiful. You will LOVE it” —MARIAN KEYES

“I want you to read this” —PHILIPPA PERRY

“A gripping, heartbreaking tale of uncomfortable histories and the resilience of love” —GRAHAM NORTON

“Brutal, haunting, redemptive and with not an ounce of fat left on it. Beautiful” —JOJO MOYES

“Funny, tender, and heartbreaking ... A gifted storyteller” —INDEPENDENT ON SUNDAY

“Epic … Immersive, moving, horrifying and beautiful. You will LOVE it” —MARIAN KEYES

“Skilfully interweaves interlocking stories from the Boer War and contemporary South Africa as it unflinchingly brings the horrors of hidden colonial history into the light of day and shows how hurt seeps down the generations” —Anita Sethi, Scotland on Sunday

“This would be an achievement for a third or fourth novel; for a first, it's an astonishing one. Barr's handling of his bravely chosen material - the conjoined shames of British and Afrikaaner history - is deft and the results will haunt you” —PATRICK GALE

“It's rare for a novel to go so deep that you come out of reading it a different person from when you went in. Damian Barr's investigation of a part of South Africa's history the British have been trying to forget for many many years is such a book. It was a very brave book to write, and parts of it call for some courage to read, but nothing more unusual and impressive has appeared for years” —DIANA ATHILL

“Damian Barr has written a novel concerned with single strain of human history, of how a people are made and unmade and how they go on to make and unmake others, of the stories they tell themselves to allow such things to pass. In so doing he has captured the threads of all of human history. You Will Be Safe Here is as unexpected as it is unsettling, both in the telling and in the way that telling works to reveal hidden trails through the points of light and darkness, such that the reader arrives at the end to stand before a view over one hundred years in the making and says, I see it now” —AMINATTA FORNA

“You Will Be Safe Here is eviscerating in its rendering of violence and masculinity in South Africa [and] exquisite in its depiction of suffering and love. You will see the world differently after reading this – it speaks so eloquently and compassionately against a world defined by dominance and brute force and the blind repetition of history. It brought me to tears – the beauty of the language, Barr's tenderness with his characters, and the horror that is done in the name of power” —MARGIE ORFORD

“[Barr] has achieved something remarkable – a powerfully moving tale that weaves dazzlingly between the Boer war and contemporary South Africa” —PICKS FOR 2019, OBSERVER

“Few writers can wind you with a word. But Damian Barr doesn't just do that, he tickles and then floors you, delights only to devastate, within a single phrase” —PATRICK STRUDWICK

“Damian Barr splits open lost history, sunlit moments of love and all private grief with this novel, a chisel at one end and a telescope at the other. Insightful and compassionate, open-hearted and unblinking, Barr gives us three unforgettable stories in this powerful, groundbreaking book” —AMY BLOOM

“Wonderful. I finished the book in tears ... [Barr] writes beautifully, emotively and yet cleanly, without pressing any point so hard that it becomes polemic instead of truth” —JESSICA FELLOWES

“Sweeping yet intimate, heart-breaking yet often very funny … This book confirms Barr as one of our most brilliant and big-hearted writers” —ALEX PRESTON

“Barr proves that the future has the power to reshape the past. He also reminds us of the effects of time mean people living in the same place can inhabit different worlds … Time is almost too quaint itself, too neutral a concept if we think about it only in terms of measurement, to properly capture what Barr sets out to achieve. This is a book about time as the accumulation of experience, both personal and collective. Experience is the same as history and history is the things people do. This is a book about the things people do to each other” —HERALD

“Pulls you in, breaks your heart and then ultimately repairs it.” —JOJO MOYES, OBSERVER BOOKS OF THE YEAR

“There is pain on these pages and poetry too. I left this book bruised yet somehow better for it” —TAYARI JONES, OBSERVER, BOOKS OF THE YEAR