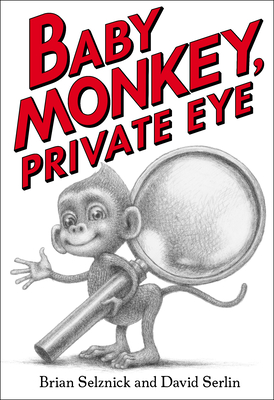 Who is Baby Monkey?

He is a monkey.

He is Baby Monkey, Private Eye!

if he can put on his pants!

Baby Monkey's adventures come to life in an exciting blend of picture book, beginning reader, and graphic novel. With pithy text and over 120 black and white drawings accented with red, it is ideal for sharing aloud and for emerging readers.

Brian Selznick's books have garnered countless accolades worldwide, and have been translated into more than 35 languages. He is the Caldecott Medal-winning creator of the #1 New York Times bestsellers The Invention of Hugo Cabret, adapted into Martin Scorsese's Oscar-winning movie Hugo; and Wonderstruck, adapted into the eponymous movie by celebrated filmmaker Todd Haynes, with a screenplay by Selznick; as well as the New York Times bestsellers The Marvels and Baby Monkey, Private Eye. Most recently, he illustrated the 20th anniversary paperback edition covers of J.K. Rowling's Harry Potter series.

David Serlin is a writer, editor, and historian who teaches at the University of California, San Diego. He is the author or editor of numerous books and articles for adults, as well as the co-author of the highly acclaimed Baby Monkey, Private Eye.

* "Selznick and Serlin take the easy reader format to new creative heights....The sharp pacing and charming humor also make it an excellent read-aloud choice....as funny as it is elegant. This will be enjoyed equally by youngsters and their grown-ups." --School Library Journal, starred review

* "Kids will forget they are learning to read, focusing instead on the comic bits, persistence, and vulnerability of an endearing hero." --Kirkus Reviews, starred review

* "New readers will delight in the details... and the spot-on slapstick pacing of the putting-on-pants sequences will have viewers giggling for days." --The Horn Book, starred review

* "Repetition of words brings this within reach of timid readers, while the absurdity expands the appeal... It's the detailed full spreads, however, that stop the show and cinematically change the pace, especially the ones set in Baby Monkey's atmospheric office... The book is therefore a delight for reading together or alone, and the weight of the volume will provide considerable satisfaction to novice readers..." --Bulletin of the Center for Children's Books, starred review

"A good choice for all libraries and classrooms as a confidence booster for beginning readers." --School Library Connection, recommended

Awards and Praise for The Invention of Hugo Cabret:

"If your kid loves the J.K. Rowling series, then [they are] bound to enjoy The Invention of Hugo Cabret. . ." -- Good Housekeeping

* "An original and creative integration of art and text." -- The Bulletin of the Center for Children's Books, starred review

"Brian Selznick proves to be that rare creator capable of following one masterpiece--The Invention of Hugo Cabret--with another even more brilliantly executed." -- The Washington Post

"Another entrancing, exquisitely illustrated novel . . . Older kids and adults alike will be mesmerized by the interlocking stories. A verbal and visual marvel." -- Family Circle

* "Innovative . . . has the makings of a classic." -- Publishers Weekly, starred review

* "A thing of wonder to behold . . . an emotional experience that neither the words nor the illustrations could achieve on their own." -- School Library Journal,starred review

Praise for The Marvels:

* "Selznick continues his quest to shake up notions of illustrated novels, wordless storytelling, and the intersection of text and pictures in this newest volume . . . The novel as a whole is exactly the sort of theater that is so lovingly described within." -- The Bulletin of the Center for Children's Books, starred review