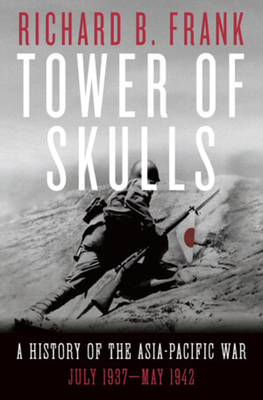 An eye-opening, pathbreaking account of the onset of the Asia-Pacific War, by the acclaimed author of Downfall and Guadalcanal.

In 1937, the swath of the globe east from India to the Pacific Ocean enclosed half the world’s population, all save a fraction enduring under some form of colonialism. Japan’s onslaught into China that year unleashed a tidal wave of events that fundamentally transformed this region and killed about twenty-five million people. From just two nation states with real sovereignty, Thailand and Japan, and two with compromised sovereignty, China and Mongolia, the region today encompasses at least nineteen major sovereign nations. This extraordinary World War II narrative vividly describes in exquisite detail the battles across this entire region and links those struggles on many levels with their profound twenty-first-century legacies.

Beginning with China’s long-neglected years of heroic, costly resistance, Tower of Skulls explodes outward to campaigns including Singapore, the Philippines, the Netherlands East Indies, India, and Burma, as well as across the Pacific to Pearl Harbor. These pages cast penetrating light on how struggles in Europe and Asia merged into a tightly entwined global war. They feature not just battles, but also the sweeping political, economic, and social effects of the war, and are graced with a rich tapestry of individual characters from top-tier political and military figures down to ordinary servicemen, as well as the accounts of civilians of all races and ages.

In this first volume of a trilogy, award-winning historian Richard B. Frank draws on rich archival research and recently discovered documentary evidence to tell an epic story that gave birth to the world we live in now.

Richard B. Frank is an internationally acclaimed historian of the Asia-Pacific War. He was an aerorifle platoon leader with the 101st Airborne Division in Vietnam and is the author of Guadalcanal and Downfall. He is a member of the Board of Presidential Counselors of the National WWII Museum and lives in Annandale, Virginia.

The first of what promises to be a magisterial trilogy.... Serious scholars and professionals in and out of uniform should read this book, which thoroughly fills a gap many have in the history of World War II.
— Lt. Col. Robert Bateman, U.S. Army retired

Outstanding, wide-ranging.... Frank has a humane, sure eye for detail.
— Rana Mitter

Magisterial.... Frank’s searing account of the horrors that took place in Shanghai, not to mention Nanking, doesn’t just come down to the numbers that were slaughtered, raped or made destitute by men crazed by war. It’s not about the statistics, though he’s good on them too. It was his account of the chaos of war that most gripped me.... Excellent though he is at most things, Frank is arguably at his best in his portrayal of both the leading and minor characters in this story.
— Malcolm Murfett

Frank offers readers a wealth of material that provides a more nuanced perspective of the events that preceded our entry into the war....There will be two more volumes to come in this set, and I cannot wait to read them.
— Vick Mickunas

In Tower of Skulls historian Richard B. Frank has crafted a sweeping epic of the first five years of World War II in Asia, from the horrors of the Rape of Nanking through the catastrophic attack on Pearl Harbor and the tragic fall of the Philippines. In Frank’s expert hands readers will be transported from the battered Chinese capital of Chongqing to the roaring cockpits of torpedo bombers swarming the skies over Oahu down to the bloody emergency room where a little girl still clung to a jump rope. In this gripping first volume, Frank promises to do for the war in the Pacific what Rick Atkinson did for Europe.

This magisterial work swarms with events and personalities, which, with masterly deftness, the author marshals into a powerful narrative that never loses momentum as it recounts calamities familiar (Pearl Harbor, the disgraceful collapse of British-held Singapore) and forgotten (Chiang Kai-shek’s breaching of the Yellow River dykes to impede the Japanese advance killed 900,000 people and left 4 million homeless). Vivid, engrossing, and indispensable to an understanding of today’s world, Tower of Skulls gives fresh legitimacy to the shopworn encomium 'epic.'

— Richard Snow, author of A Measureless Peril: America in the Fight for the Atlantic, the Longest Battle of World War II

In this impressive reassessment of the early phases of the Pacific War, Richard B. Frank offers a rare combination of deep scholarship, thoughtful analysis, and compelling prose to illuminate aspects of the war too-often overlooked in Western accounts: China, Malaya, Burma, and Bataan. This is an essential and rewarding work for anyone who wants to understand World War II.
— Craig L. Symonds, author of World War II at Sea: A Global History

Richard Frank’s Asia-Pacific War trilogy is destined to become as much a ‘go-to’ scholar’s source as his definitive Guadalcanal book has long been invaluable for researchers of America’s first Pacific offensive of 1942. Tower of Skulls is deeply researched, providing fresh evaluation of the political, economic, and military scenes of the early years of World War II. And yet this book remains highly readable, thanks to an artful blend of personal perspectives and colorful battle summaries.

Tower of Skulls is the opening volume of what promises to be the definitive history of the Asia-Pacific War, a gripping account of two wars, one on the Asian mainland, the other in the islands of the Pacific, that conjoined and became a history-changing struggle without mercy or precedent. The scope is epic and the story has the pulling power of fiction. It is that rare thing: a work of staggering scholarship bound to appeal to a wide reading audience.