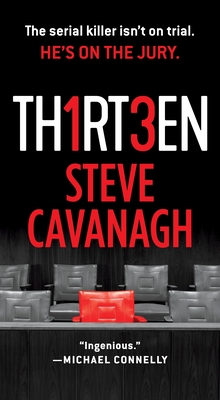 By Steve Cavanagh
$9.99
On Our Shelves Now

This is book number 3 in the Eddie Flynn series.


It’s the murder trial of the century—and Joshua Kane has killed to get the best seat in the house. He has done everything in his power to make sure the wrong man goes down for the crime. Because this time, the killer isn’t on trial. He’s on the jury.

“A terrific hook…more twists than a tornado… A genuine, read-in-one-sitting page-turner.” —The Guardian

But there’s someone on his tail. Defense lawyer and former conman Eddie Flynn doesn’t believe that his movie-star client killed two people. He suspects that the real killer is closer than they think—but who would guess just how close?

Steve Cavanagh is an Irish author from Belfast and at the age eighteen he studied law by mistake. He is now the international award-winning author of the Eddie Flynn novels. His debut novel, The Defense, was nominated for the Ian Fleming Steel Dagger Award for Thriller of the Year, and The Plea won the Prix Polar Award for Best International Novel. Steve is still a practicing lawyer (someday he’ll get the hang of it) and co-host ofthe chart-topping podcast Two Crime Writers And A Microphone. He has been involved in several high-profile civil rights cases, his Eddie Flynn novels have been published in over twenty countries, he’s married with two young children, and in his spare time he is mostly asleep.

“A terrific hook, a thoroughly likable protagonist and more twists than a tornado… A genuine, read-in-one-sitting page-turner.” —The Guardian

“Courtroom drama at its finest…Thirteen is an outstanding legal thriller, so original, clever and accomplished that it should not be missed. It marks out Cavanagh as the heir apparent to John Grisham.” —Express (UK)

“A dead bang BEAST of a book that expertly combines his authority on the law with an absolutely great thrill ride. Books this ingenious don’t come along very often.” —Michael Connelly, #1 New York Times bestselling author

“Dazzling…One of the most accomplished legal dramas I have read this year, it reminds me of Scott Turow’s stunning Presumed Innocent.” —Daily Mail

“A knockout legal thriller with a doozy of a twist.”
—Booklist, starred review

“Any reader's sheer delight.... Thirteen is a thrilling blitz of a novel, for new readers or old fans. Even as the driving question is less who and more how, there is no shortage of plot twists.”
—Shelf Awareness

“A blisteringly exciting ingenious thriller with an utterly chilling killer.” —The People (UK)

“An oh so clever hook for an oh so clever, gripping book. Thirteen is courtroom drama at its finest, blended with page-turning twists and characters you can't get enough of. Steve Cavanagh is the John Grisham for a new generation. Slick, thrilling and unique, Thirteen is my favorite read of the year.” —Sarah Pinborough, New York Times bestselling author

“Smart and original. This is a belter of a book.” —Clare Mackintosh, New York Times bestselling author

“A great hook and the book lives up to it!” —Ian Rankin, New York Times bestselling author