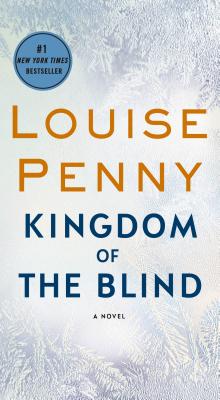 By Louise Penny
$9.99
Usually Ships From Store in 3-5 Business Days

This is book number 14 in the Chief Inspector Gamache Novel series.

It’s six months after the events Glass Houses and Armand Gamache has been suspended from the Surete’ du Quebec. Although he put a major drug dealer behind bars, his actions allowed a portion of the deadly drug to get through as well as getting one of his best officers almost killed.

Amidst an investigation that will almost surely see an end to his career, he receives a letter that informs him that he’s an executor to a will for a woman that he’s never met. When a body is found in the ruins of an old home, a simple last testament becomes a mystery that goes back over 100 years.

Gamache is in a race to find the cache of drugs before they hit the streets and kill thousands while trying to piece together the tangled motives of an apparently penniless widow who left millions to her children.

Penny has the Agatha Christie gift of creating a village of wonderfully eccentric characters while providing the visceral excitement of a Cara Black thriller. Kingdom of the Blind, along with a warm blanket and a cup of Irish Breakfast tea is the perfect answer to these long winter nights.

“Inspector Gamache has puzzled his way through 13 of Louise Penny’s mysteries, and his 14th is an exceptional read. Penny brings us a mystery that will delight old-school mystery lovers (a storm, the reading of a will) as well as those who enjoy a fast-paced thriller (Gamache’s plans involving the opioids he lost). The pacing is swift and the cast of characters from Three Pines is as charming and wonderful as always. The Kingdom of the Blind is easily one of the best of the series. Thank you, Louise Penny, for reminding us that kindness does exist in this mostly cruel world and that when utilized correctly, it can be inspiring and life-changing.”
— William Carl, Wellesley Books, Wellesley, MA

Blockbuster bestselling author Louise Penny keeps readers eyes’ glued to the page in Kingdom of the Blind, an “intriguing…and satisfying” (Publishers Weekly) novel about everyday life and ever-curious death in the village of Three Pines.

Why would a complete stranger name Detective Chief Armand Gamache one of the executors of her will? The will is so bizarre and includes such wildly unlikely bequests that Gamache suspects the woman was downright delusional. But what if, Gamache begins to ask himself, she was perfectly sane? When a dead body turns up in town, the terms of the will suddenly seem far more menacing.

Meanwhile, the investigation into the events that led to Gamache’s suspension keeps deepening. Most of the opioids Gamache let slip though his hands—in order to bring down the big-city cartels—have been retrieved, but there is one devastating exception. Soon, he enters a race against time to locate the deadly missing drug. As he uses increasingly audacious, even desperate, measures to retrieve it, Gamache begins to see his own blind spots…and the terrible truth that may be hiding in plain sight.

“Louise Penny’s novels are unique for how seamlessly they straddle the line between charmingly small-town mysteries and big-city police procedurals . . . It’s not to be missed!” —BookPage (Top Pick)

“It’s hard to see how Louise Penny can raise the stakes any further for her iconic, fatherly good guy, Chief Inspector Armand Gamache, but somehow in each book she does.” —News & Observer

“Brain-teasing puzzles, life-and-death stakes and lots of Three Pines, a magical place where the warmth in the villagers’ hearts thaws the ice on their eyelashes.”—St. Louis Post Dispatch

“Complex ongoing saga… Wait anxiously for the next installment.”—Pittsburgh Post-Gazette

“Penny does a splendid job of interweaving those three main plot lines, studding them with several life-threatening scenes that had me holding my breath, and building to a wild finale.”—Tampa Bay Tribune

“A Louise Penny book… is better than 90% of the books I read… Her books are about love and kindness and people who care.”—Lesa’s Book Critiques

“From small puzzles do large, ever-more excellent ones grown, especially in a Louise Penny novel.”—Seattle Review of Books

“Few mystery writers intertwine the personal lives of their characters with the crimes being investigated more skillfully than Penny does, and she is at her best here, as several key players face turning points in their lives, suggesting that if the past can strangle the present, it can also help clear the way for the future.”—Booklist (Starred Review)

“Penny is a master at blending the modern evils affecting the big city and hidden secrets of the almost mythical village of Three Pines. Well-known characters return and new faces add richness to a narrative that will keep readers intrigued until the last page.” —Library Journal (Starred Review)

“Insightful, well-plotted… Penny offers intriguing commentary on the willful blindness that can keep people from acknowledging the secrets and lies in their own lives. Penny wraps up some continuing story lines and sends recurring characters in surprising directions.” —Publishers Weekly

“Penny reveals a deeper vulnerability in the introspective Gamache… The ending is adrenaline-filled....This starts as a small-town mystery and becomes something grander.” —Kirkus Reviews

"I thoroughly enjoyed Kingdom of the Blind. It’s always a treat to spend a few days with Armand Gamache and his latest investigation is one of my favorites." —James Patterson