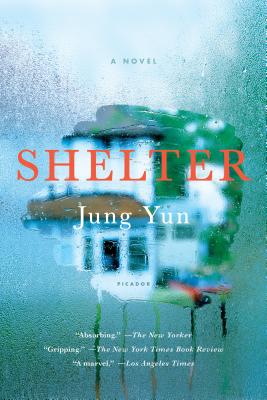 I could not put this book down…literally…I read it in one sitting!  Not only was the story devastatingly captivating, Jung Yun’s writing is masterful.  This story of an adult Korean-American son, and his relationship with his parents, specifically his mother, is not what you’d expect.  Perception, and what is customary behavior for the only son, swerves into an unforeseen direction and what is revealed about his parents’ lives will leave you wondering – do any of us really know our parents?  At times difficult to read, in Yun’s creative hand, this tragic story is brought to life with brutal honesty.

“Shelter is the perfect example of that extraordinary kind of story that careens down a path toward a conclusion that feels somehow both completely surprising and totally inevitable. Kyung Cho is a young father whose anxiety over present financial concerns couples with damage from past traumas to inhabit every breath he takes. His precarious equilibrium is shattered when his parents are the victims of a cruel act of violence and he is called upon to react with a compassion and forgiveness that he may not possess. This novel is a dark and moving portrait of a family and what it ultimately means to love.”
— Mary Cotton, Newtonville Books, Newton, MA

Kyung Cho is a young father burdened by a house he can’t afford. For years, he and his wife, Gillian, have lived beyond their means. Now their debts and bad decisions are catching up with them, and Kyung is anxious for his family’s future.

A few miles away, his parents, Jin and Mae, live in the town’s most exclusive neighborhood, surrounded by the material comforts that Kyung desires for his wife and son. He can hardly bear to see them now, much less ask for their help. Yet when an act of violence leaves Jin and Mae unable to live on their own, the dynamic suddenly changes, and Kyung is compelled to take them in. For the first time in years, the Chos find themselves living under the same roof. Tensions quickly mount as Kyung’s proximity to his parents forces old feelings of guilt and anger to the surface, along with a terrible and persistent question: how can he ever be a good husband, father, and son when he never knew affection as a child?

Jung Yun was born in Seoul, South Korea and grew up in Fargo, North Dakota. Her debut novel, Shelter was long-listed for the Center for Fiction’s First Novel Prize, a finalist for the Barnes & Noble Discover Great New Writers Award, and a semi-finalist for Good Reads’ Best Fiction Book of 2016. She was a MacDowell fellow, and her work has appeared in The Atlantic, The Washington Post, and Tin House, among others. Currently, she resides in Baltimore, and serves as an assistant professor of English at the George Washington University in Washington, D.C.

"This absorbing, suspenseful début tracks familial obligation and the legacy of trauma... The narrative piles on surprises at a tightly controlled clip, as [Kyung's] family is forced to confront the past and the price it has paid for stability."—The New Yorker

"Gripping...Yun shows how, although shelter doesn’t guarantee safety and blood doesn’t guarantee love, there’s something inextricable about the relationship between a child and a parent…Shelter is captivating.”—The New York Times Book Review

"I read the greater part of Jung Yun's Shelter in a 14-hour sitting, interrupted by only five hours of sleep. I was on a trip, with other people, but I couldn't do anything until I was finished; Yun's debut may be a family drama, but it has all the tension of a thriller. It's a sharp knife of a novel—powerful and damaging, and so structurally elegant that it slides right in....it gets better and richer with every page...Like the writer's version of a no-hitter, Shelter is a marvel of skill and execution, tautly constructed and played without mercy."—Steph Cha, Los Angeles Times

“[A] fearless and thrilling debut.”—Town & Country

"The tension inside Kyung [is] visceral...Yun skillfully makes his unraveling feel fast-paced and urgent."—Entertainment Weekly

"The combination of grisly James Patterson thriller and melancholic suburban drama shouldn’t work at all. Yet Ms. Yun pulls it off...The proximity of Kyung's parents and the atmosphere of grief and panic launch him on a spiral of self-destruction that’s impossible to turn away from."—Sam Sacks, The Wall Street Journal

“I was riveted.”—Rumaan Alam, The Millions

"[A] thrilling debut novel...Dark and gripping, Shelter exposes the jagged edges of parent-child relationships and the sacrifices we make in the name of family."—BuzzFeed, 19 Incredible Books You Need to Read This Spring

"Spare and suspenseful...This post-recession novel peels back the layers of emotional damage that the financial crisis wrought....Yun offers glimpses of family secrets as if a searchlight has illuminated them briefly, [and] as the novel continues, those secrets are fully exposed."—MPR News, The Best Books of the Year (So Far)

“If you want high stakes and suspense, you've found your book (I mean, just look at that cover). Jung Yun writes about family and identity and the tight bond between them — especially when circumstances change in startling ways…Shelter will get your heart beating for sure.”—Bustle, Most Anticipated Books of the Year

"A masterful work of literature."—Electric Literature

"This troubling, moving work from Yun explores what it means to be part of a family, even if it’s nothing close to the one you might choose for yourself."—DuJour, What to Read This Month

"It seems as though every year a novel—and its author—appears out of nowhere and gets readers everywhere talking. This year that book is Shelter, by Korean American writer Jung Yun."—South China Morning Post

“Shocking, and very poignant…This is a dark family drama that reveals layer on layer of what responsibility and duty mean, and what it looks like when they clash with an individual’s long-suppressed sense of self.”—Times Literary Supplement (London)

"[Shelter] has all the tension and pace of a thriller. Replete with secrets, misunderstandings, and guilt, this is a powerful novel about what home really means."—The Daily Mail (UK)

"In other hands, this material could fall apart or lose steam, but Jung Yun keeps it together through pitch-perfect, but flawed narrator Kyung and a high-tension storyline...An unexpected page-turner."—The Globe and Mail (Toronto)

"A searing and beautifully written novel that still haunts me—I found it hard to put it down.
...Jung Yun elevates ordinary suffering and shame into literary art with an unflinching honesty."—The International Examiner

"Yun's emotional perspicacity and tensile prose combine to turn it into something deeper than mere family melodrama..Shelter emerges as rich and multi-layered."—The Toronto Star

“Poignant, spellbinding, and profound, Shelter will keep you up until the wee hours. In her brilliant debut novel, Yun skillfully untangles this snarled web of family lies, tragedy, identity, and loss. Redemption is hard-earned, and kindness comes in rare and unexpected places, but hope shimmers just beneath the surface. This is a book of heartbreaking genius.”—Mira Bartók, winner of the National Book Critics Circle Award and bestselling author of The Memory Palace

“Jung Yun's Shelter is an urgent novel, a book so alive, contemporary, and, above all, honest, that it could only exist right now.”—James Scott, bestselling author of The Kept

“Magnetic, searing, insightful, Shelter is a mic-drop of a debut: a story of post-financial crisis America that establishes Jung Yun as a necessary new voice in American fiction.”—Alexander Chee, author of The Queen of the Night

“Like Celeste Ng’s super-lauded best seller, Everything You Never Told Me, also about a dysfunctional mixed-race family’s tragedy, [Shelter] should find itself on best-of lists, among major award nominations, and in eager readers’ hands everywhere."—Library Journal (starred review)

“There’s more than enough to appreciate in this above-average debut. Expect great things from Jung Yun.”—Bookreporter.com

“With each page, Yun takes us deeper into Kyung’s troubles…As the crime drama unfolds in the background, Yun expertly explores what it means to be an immigrant in America, the true value of tradition, the parent-child bond, what makes a good marriage, and the need for forgiveness… Yun introduces us to a man riddled with anger and self-doubt, leaving the reader to judge whether time can truly mend what’s broken.” —BookPage

“In her intense debut, Yun explores the powerful legacy of familial violence and the difficulty of finding the strength and grace to forgive... This family drama [is] rife with tension and unexpected ironies.”—Publishers Weekly