In the Midst of Civilized Europe: The Pogroms of 1918–1921 and the Onset of the Holocaust (Hardcover) 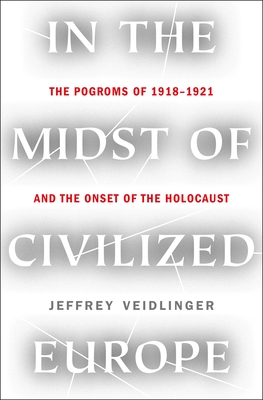 “The mass killings of Jews from 1918 to 1921 are a bridge between local pogroms and the extermination of the Holocaust. No history of that Jewish catastrophe comes close to the virtuosity of research, clarity of prose, and power of analysis of this extraordinary book. As the horror of events yields to empathetic understanding, the reader is grateful to Veidlinger for reminding us what history can do.”
—Timothy Snyder, author of Bloodlands

Between 1918 and 1921, over a hundred thousand Jews were murdered in Ukraine by peasants, townsmen, and soldiers who blamed the Jews for the turmoil of the Russian Revolution. In hundreds of separate incidents, ordinary people robbed their Jewish neighbors with impunity, burned down their houses, ripped apart their Torah scrolls, sexually assaulted them, and killed them. Largely forgotten today, these pogroms—ethnic riots—dominated headlines and international affairs in their time. Aid workers warned that six million Jews were in danger of complete extermination. Twenty years later, these dire predictions would come true.

Drawing upon long-neglected archival materials, including thousands of newly discovered witness testimonies, trial records, and official orders, acclaimed historian Jeffrey Veidlinger shows for the first time how this wave of genocidal violence created the conditions for the Holocaust. Through stories of survivors, perpetrators, aid workers, and governmental officials, he explains how so many different groups of people came to the same conclusion: that killing Jews was an acceptable response to their various problems. In riveting prose, In the Midst of Civilized Europe repositions the pogroms as a defining moment of the twentieth century.

Jeffrey Veidlinger is a professor of history and Judaic studies at the University of Michigan. His books, which include The Moscow State Yiddish Theater and In the Shadow of the Shtetl, have won a National Jewish Book Award, the Barnard Hewitt Award for Theatre Scholarship, two Canadian Jewish Book Awards, and the J. I. Segal Award. He lives in Ann Arbor, Michigan.

“Veidlinger’s book ranks alongside Timothy Snyder’s Bloodlands in forcing our eyes eastwards. It is deeply researched and masterfully written, with a cool restraint that only intensifies its power.”
—The Telegraph

“Exemplary . . . Gripping . . . We now know much more about the pogroms of 1918–21 because of Veidlinger’s painstaking research, based on a vast trove of archival materials and reliance on at least nine languages. He has succeeded in shining a bright scholarly light on a much less well-known attempt to exterminate European Jews two decades before the Holocaust.”
—Literary Review

“An exhaustive, clearly written, deeply researched story of events in a time and place most of us know nearly nothing about . . . An important and scholarly book.”
—The Times (UK)

“Revelatory . . . Veidlinger’s crisp prose and extensive research makes the scale of the tragedy immediate and devastating. This is a vital addition to understanding how the Holocaust happened.”
—Publishers Weekly

“Highly recommended as a critical history analyzing the factors that led to the Holocaust… Veidlinger honors the victims of pogroms and ensures they are not forgotten in this important work.”
—Library Journal

“The mass killings of Jews in 1918–21 are a bridge between local pogroms and the extermination of the Holocaust. No history of that Jewish catastrophe comes close to the virtuosity of research, clarity of prose, and power of analysis of this extraordinary book. As the horror of events yields to empathetic understanding, the reader is grateful to Veidlinger for reminding us what history can do.”
—Timothy Snyder, author of Bloodlands

“A work of singular importance: a meticulous, original and deeply affecting historical account, one that provides new insights into the conditions that catalyzed mass-murder on an industrial scale.”
—Philippe Sands, author of East West Street

“In this extraordinary work Veidlinger disinters a largely forgotten history of tragic and portentous dimensions. Compelling and well-written, the book will find a broad audience. This is a story that needs to be told.”
—Ronald Grigor Suny, author of Stalin: Passage to Revolution

“In this deeply learned but highly readable book, Veidlinger demonstrates how the all-but-forgotten pogroms in the collapsing Russian Empire in 1918–21 set precedents for the horrors that were to follow just two decades later.”
—Zvi Gitelman, author of A Century of Ambivalence