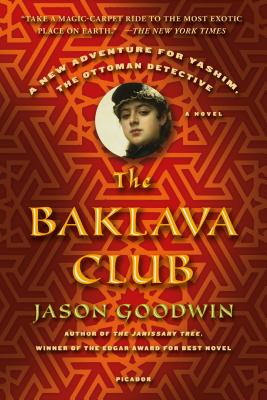 This is book number 5 in the Investigator Yashim series.

In four previous novels, Jason Goodwin's Inspector Yashim, the eunuch detective, has led us through stylish, suspenseful, and colorful mysteries in the Istanbul of the Ottoman Empire. Now, in The Baklava Club, Yashim returns for his final adventure-and his most thrilling yet.
Three naïve Italian liberals, exiled in Istanbul, have bungled their instructions to kill a Polish prince-instead, they've kidnapped him and absconded to an unused farmhouse. Little do they realize that their revolutionary cell has been penetrated by their enemies, who are passing along false orders under the code name La Piuma, the Feather.
It falls to Yashim to unravel all this-he's convinced that the prince is alive and that the Italians have hidden him somewhere. But there are just a few problems: He has no idea who La Piuma is, and he's in no mood to put up a fight-he's fallen in love! As he draws closer to the farmhouse and to the true identity of La Piuma, what Yashim discovers leaves him shocked and in the most dangerous situation of his career.
Goodwin has an eye for detail like no other, and in The Baklava Club he conjures Istanbul in all its glorious exoticism. This is a breathtaking, extraordinary conclusion to one of the most beloved series in mystery fiction, and its ending will leave you truly astonished.

JASON GOODWIN is the Edgar Award–winning author of the Investigator Yashim series. The first five books—The Janissary Tree, The Snake Stone, The Bellini Card, An Evil Eye, and The Baklava Club—have been published to international acclaim, alongside Yashim Cooks Istanbul, a cookbook of Ottoman Turkish recipes inspired by the series. Goodwin studied Byzantine history at Cambridge and is the author of Lords of the Horizons: A History of the Ottoman Empire, among other award-winning nonfiction. He lives with his wife and children in England.

“Take a magic-carpet ride to the most exotic place on earth.” —The New York Times

“A worthy conclusion. Fans of the entries will not be disappointed, and new readers who enjoy historical mysteries set in exotic locations and periods will probably go back to read each title.” —Library Journal

“When you read a historical mystery by Jason Goodwin, you take a magic carpet ride to the most exotic place on earth.” —Marilyn Stasio, The New York Times Book Review