Tom Clancy's Op-Center: Into the Fire: A Novel (Paperback) 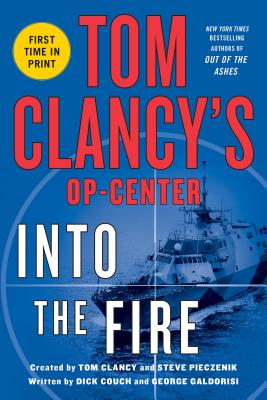 Tensions flare in Northwest Asia and Op-Center races to prevent World War III in this chilling, ripped-from-the-headlines thriller from the authors of the USA Today bestseller Out of the Ashes.

When a team of assassins murder a high-ranking North Korean general and his family in their sleep, making it look like a robbery, events are set in motion that could shake the balance of world powers. Meanwhile, a U.S. naval combat ship, the USS Milwaukee, is attacked by North Korean forces in the middle of a training exercise off the shore of South Korea, and Commander Kate Bigelow is forced to ground the ship to avoid being captured. The crew takes refuge on a tiny island, trapped dangerously between the grounded ship and a fleet of hostile North Korean soldiers.

Op-Center intelligence discovers a secret alliance behind the attack—a pact between China and North Korea that guarantees China total control of a vast oil reserve found beneath the Yellow Sea. As both sides marshal their forces for a major confrontation at sea, Chase Williams and his Op-Center organization devise a plan to secretly spirit the American crew from the island and out from under North Korean control. But the North Koreans are not finished. In a desperate gamble, they unleash a terrorist cell on the American homeland. Only Op-Center can uncover their plan and stop it in time to prevent a major catastrophe that could lead to all-out war.

DICK COUCH is a graduate of the U.S. Naval Academy who has served as a Navy SEAL and as a CIA case officer. His nonfiction works include By Honor Bound, Down Range, The Finishing School, and The Warrior Elite.

GEORGE GALDORISI is a career naval aviator. His Navy career included four command tours and five years as a carrier strike group chief of staff. He has written several books, including (with Dick Couch), the New York Times best seller, Tom Clancy Presents: Act of Valor; The Kissing Sailor, which proved the identity of the two principals in Alfred Eisenstaedt's famous photograph; and over 200 articles in professional journals and other media. He is the Director of the Corporate Strategy Group at the Navy's C4ISR Center of Excellence in San Diego, California. He and his wife Becky live in Coronado, California.

Tom Clancy's many thrillers include The Hunt for Red October, Patriot Games and Clear and Present Danger. He died in 2013.

Steve Pieczenik is an author and co-creator of Tom Clancy's Op-Center series.

“Op-Center is back with a vengeance! . . . Couch and Galdorisi have just raised the bar for military adventure fiction. Suit up, strap in, and hang on, because you're in for one hell of a ride.” —Jeff Edwards, bestselling author of The Seventh Angel