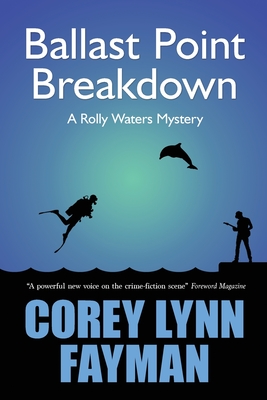 This is book number 4 in the Rolly Waters Mystery series.

The fourth novel in the Rolly Waters mystery series.

On a cool winter evening, a speedboat hurtles across San Diego Bay and crashes into the Admiral's Club where a farewell party for the Navy's top-secret Dolphin Divers program is underway. As guests flee the ensuing fire, a woman named Janis Withers crawls from the inferno and screams her last words - Arion has returned

Guitar-playing private detective Rolly Waters finds himself pulled into the case when he connects Janis to a pair of dog tags left behind by Butch Fleetwood, a member of the Dolphin Divers who disappeared during a training exercise twenty years earlier.

While fending off the FBI and local police, Rolly uncovers tantalizing connections between Fleetwood, a crusading journalist, a celebrity artist, a punk rock singer, a radical animal-rights organization, and the dead woman's own dysfunctional family. As he races against the authorities to uncover Arion's true identity, Rolly's investigation begins to reverberate with his own painful history. His search for the truth leads to him to a ruined casino on a deserted Mexican island where shocking secrets are unleashed in a ruthless showdown between tormented and tormentors.