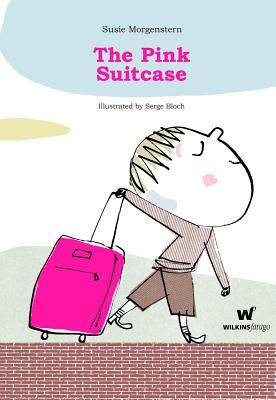 What was his grandmother thinking when she bought Benjamin such a strange present: an empty pink suitcase! To his mother’s horror, Benjamin is not only drawn to the suitcase—he absolutely loves it. What’s more, as he grows older he shows no signs of wanting to give it up. Spanning the generations, The Pink Suitcase is a warm-hearted and amusing tale about being different and celebrating the individual.

Originally from Newark, New Jersey, Susie Morgenstern is now one of the most popular children's authors in France. Her previous books include I Will Make Miracles and Princesses are People, Too. Serge Bloch has worked as an editorial illustrator for Chicago Tribune, Los Angeles Times, New York Times, Wall Street Journal, and Washington Post, as well as New York Magazine and Time. His awards include a Gold Medal from the American Society of Illustrators, France's prestigious Baobab Prize, and Honor Book in the American Library Association's Batchelder Award.