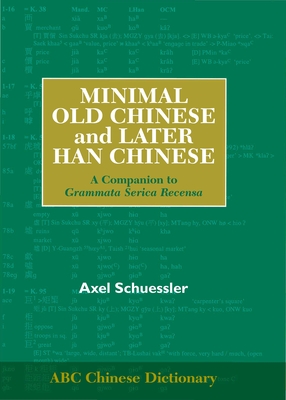 By Axel Schuessler
$58.00
Email or call for price.

This is book number 7 in the ABC Chinese Dictionary series.

Although long out of date, Bernard Karlgren's (1957) remains the most convenient work for looking up Middle Chinese (ca. A.D. 600) and Old Chinese (before 200 B.C.) reconstructions of all graphs that occur in literature from the beginning of writing (ca. 1250 B.C.) down to the third century B.C. In the present volume, Axel Schuessler provides a more current reconstruction of Old Chinese, limiting it, as far as possible, to those post-Karlgrenian phonological features of Old Chinese that enjoy some consensus among today's investigators. At the same time, the updating of the material disregards more speculative theories and proposals. Schuessler refers to these minimal forms as Minimal Old Chinese (OCM). He bases OCM on Baxter's 1992 reconstructions but with some changes, mostly notational. In keeping with its minimal aspect, the OCM forms are kept as simple as possible and transcribed in an equally simple notation. Some issues in Old Chinese phonology still await clarification; hence interpolations and proposals of limited currency appear in this update.

Karlgren's Middle Chinese reconstructions, as emended by Li Fang-kuei, are widely cited as points of reference for historical forms of Chinese as well as dialects. This emended Middle Chinese is also supplied by Schuessler. Another important addition to Karlgren's work is an intermediate layer midway between the Old and Middle Chinese periods known as Later Han Chinese (ca. second century A.D.) The additional layer makes this volume a useful resource for those working on Han sources, especially poetry. This book is intended as a companion to the original Grammata Serica Recensa and therefore does not repeat other information provided there. Matters such as English glosses and references to the earliest occurrence of a graph can be looked up in Grammata Serica Recensa itself or in other relevant dictionaries. The great accomplishment of this companion volume is to update an essential reference and thereby fulfill the need for an accessible and user-friendly source for citing the various historically reconstructed stages of Chinese.