The Battle for the Court: Interest Groups, Judicial Elections, and Public Policy (Constitutionalism and Democracy) (Hardcover) 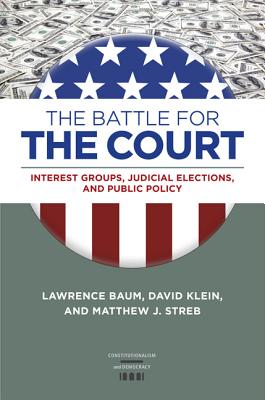 By Lawrence Baum, David Klein, Matthew J. Streb
This title is not available for purchase.

Once largely ignored, judicial elections in the states have become increasingly controversial over the past two decades. Legal organizations, prominent law professors, and a retired Supreme Court justice have advocated the elimination of elections as a means to choose judges. One of their primary concerns is interest group involvement in elections to state supreme courts, which they see as having negative effects on both the courts themselves and public perceptions of these judicial bodies.

In The Battle for the Court, Lawrence Baum, David Klein, and Matthew Streb present a systematic investigation into the effects of interest group involvement in the election of judges. Focusing on personal-injury law, the issue that has played the most substantial role in spurring interest group activity in judicial elections, the authors detail how interest groups mobilize in response to unfavorable rulings by state supreme courts, how their efforts influence the outcomes of supreme court elections, and how those outcomes in turn effectively reshape public policies. The authors employ several decades' worth of new data on campaign activity, voter behavior, and judicial policy-making in one particularly colorful, important, and representative state--Ohio--to explore these connections among interest groups, elections, and judicial policy in a way that has not been possible until now.