The Many-Headed Hydra: Sailors, Slaves, Commoners, and the Hidden History of the Revolutionary Atlantic (Paperback) 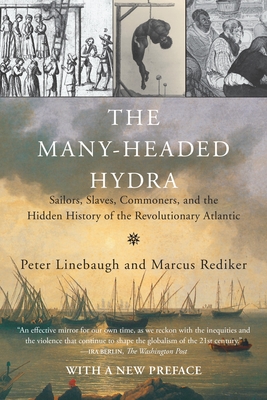 By Peter Linebaugh, Marcus Rediker
This title is not available for purchase.

Long before the American Revolution and the Declaration of the Rights of Man, a motley crew of sailors, slaves, pirates, laborers, market women, and indentured servants had ideas about freedom and equality that would forever change history. The Many Headed-Hydra recounts their stories in a sweeping history of the role of the dispossessed in the making of the modern world.

When an unprecedented expansion of trade and colonization in the early seventeenth century launched the first global economy, a vast, diverse, and landless workforce was born. These workers crossed national, ethnic, and racial boundaries, as they circulated around the Atlantic world on trade ships and slave ships, from England to Virginia, from Africa to Barbados, and from the Americas back to Europe.

Marshaling an impressive range of original research from archives in the Americas and Europe, the authors show how ordinary working people led dozens of rebellions on both sides of the North Atlantic. The rulers of the day called the multiethnic rebels a 'hydra' and brutally suppressed their risings, yet some of their ideas fueled the age of revolution. Others, hidden from history and recovered here, have much to teach us about our common humanity.

Peter Linebaugh, professor of history at the University of Toledo, is a contributing editor of Albion's Fatal Tree and author of The London Hanged.

Marcus Rediker, professor of history at the University of Pittsburgh, is author of Between the Devil and the Deep Blue Sea, winner of the American Studies Association's John Hope Franklin Prize and the Organization of American Historians' Merle Curti Social History Award.

For most readers the tale told here will be completely new. For those already well acquainted with the seventeenth and eighteenth centuries, the image of that age which they have been so carefully taught and cultivated will be profoundly challenged. --David Montgomery, author of Citizen Worker

"A landmark in the development of an Atlantic perspective on early American history. Ranging from Europe to Africa to the Caribbean and North America, it makes us think in new ways about the role of working people in the making of the modern world."--Eric Foner, author of The Story of American Freedom

"What would the world look like had the levelers, the diggers, the ranters, the slaves, the castaways, the Maroons, the Gypsies, the Indians, the Amazons, the Anabaptists, the pirates . . . won? Peter Linebaugh and Marcus Rediker show us what could have been by exhuming the revolutionary dreams and rebellious actions of the first modern proletariat, whose stories~until now~were lost at sea. They have recovered a sunken treasure chest of history and historical possibility and spun these lost gems into a swashbuckling narrative full of labor, love, imagination, and startling beauty." --Robin D. G. Kelley, author of Yo' Mama's Disfunktional!

"The Many-Headed Hydra is about connections others have denied, ignored, or underemployed. In the sixteenth and seventeenth centuries, Europe, Africa, and the Americas came together to create a new economy and a new class of working people. Peter Linebaugh and Marcus Rediker tell their story with deep sympathy and profound insight. . . . A work of restoration and celebration of a world too long hidden from view."--Ira Berlin, author of Many Thousands Gone: The First Two Centuries of Slavery in North America

"More than just a vivid illustration of the gains involved in thinking beyond the boundaries between nation-states. Here, in incendiary form, are essential elements for a people's history of our dynamic, transcultural present."--Paul Gilroy, author of The Black Atlantic

"This is a marvelous book. Linebaugh and Rediker have done an extraordinary job of research into buried episodes and forgotten writings to recapture, with eloquence and literary flair, the lost history of resistance to capitalist conquest on both sides of the Atlantic."--Howard Zinn, author of A People's History of the United States