The Case of Rose Bird: Gender, Politics, and the California Courts (Hardcover) 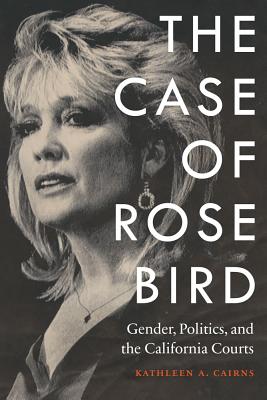 Rose Elizabeth Bird was forty years old when in 1977 Governor Edmund G. “Jerry” Brown chose her to become California’s first female supreme court chief justice. Appointed to a court with a stellar reputation for being the nation’s most progressive, Bird became a lightning rod for the opposition due to her liberalism, inexperience, and gender. Over the next decade, her name became a rallying cry as critics mounted a relentless effort to get her off the court. Bird survived three unsuccessful recall efforts, but her opponents eventually succeeded in bringing about her defeat in 1986, making her the first chief justice to be removed from the California Supreme Court.

The Case of Rose Bird provides a fascinating look at this important and complex woman and the political and cultural climate of California in the 1970s and 1980s. Seeking to uncover the identities and motivations of Bird’s vehement critics, Kathleen A. Cairns traces Bird’s meteoric rise and cataclysmic fall. Cairns considers the instrumental role that then-current gender dynamics played in Bird’s downfall, most visible in the tensions between second-wave feminism and the many Americans who felt that a “radical” feminist agenda might topple long-standing institutions and threaten “traditional” values.

Kathleen A. Cairns is a lecturer of history and women’s studies at California Polytechnic University, San Luis Obispo. She is the author of several books, including Proof of Guilt: Barbara Graham and the Politics of Executing Women in America (Nebraska, 2013).

"This book would be an asset to both law and academic libraries. Law students and professors would be delighted with the insider view of the inner workings of a state supreme court. Additionally, the book provides insight into the sparse job opportunities that were available for women in law during the 1960s and1970s. This historical perspective could be useful for both law students and professors. . . . It would be beneficial for academic libraries that have patrons engaged in political science studies or gender studies."—Janeen Williams, Law Library Journal

“Kathleen Cairns offers an insightful, brightly written, and unvarnished history of Rose Bird’s years as California chief justice, and a powerful reminder about the importance and fragility of an independent judiciary.”—Dan Morain, editorial page editor and columnist for the Sacramento Bee who covered the Bird court from 1984 to 1986 for the Los Angeles Times

“Cairns deftly weaves Bird’s biography into the larger stories of the time: the anti-feminist backlash, the increasing importance of money in politics, and the nasty, take-no-prisoners campaigns of the modern era. Extensively researched and expertly written, it will delight scholars and general readers alike. A must-read.”—Kathryn S. Olmsted, professor and chair of the History Department at the University of California–Davis and author of Right Out of California: The 1930s and the Big Business Roots of Modern Conservatism


“This book is a smart, crisply crafted narrative that situates a controversial jurist within a larger debate about the impact of sound bite partisan politics on the American judiciary.”—Vicki L. Ruiz, Distinguished Professor of History and Chicano/Latino Studies at the University of California, Irvine

“Written in a style that is consistently clear and sprightly, The Case of Rose Bird offers both enlightenment and pleasure to readers interested in politics, the judiciary, women and government, and California’s history.”—Susan Hartmann, professor emeritus of history at Ohio State University and author of The Other Feminists: Activists in the Liberal Establishment