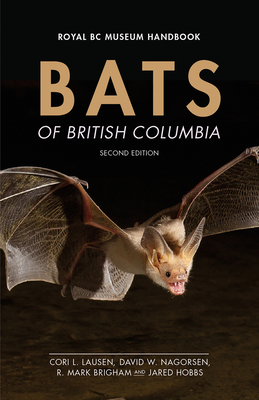 With more than 1,400 species worldwide, bats live on every continent except Antarctica and in virtually every type of habitat, from desert to forest. Around the globe, bats fill important ecological roles by controlling insect populations, pollinating plants, dispersing seeds, and even providing humans with medicines—the saliva of the famous vampire bat can be used to treat strokes! Yet despite their importance to the planet’s ecosystems, there remains more misinformation than fact and more fear than respect for these diminutive guardians of the night.

Since the first edition of Bats of British Columbia was published in 1993, an explosion in field studies of the province’s bat fauna, applying new tools such as genetic techniques and acoustic bat detectors, has added a wealth of new knowledge. This fully updated second edition includes new colour photographs throughout, with new material on acoustic identification. With in-depth information on biology, conservation, ecology, and identification of the 18 species found in the province, the new Bats of British Columbia will help create an appreciation of this fascinating group of mammals.

Cori Lausenis a biologist and director of bat conservation with Wildlife Conservation Society Canada, leading a comprehensive research and conservation bat program in western Canada. She has taught biologists across North America the fundamentals of bat acoustics and using bat detectors for species identification. She helped design and is on the core continental committee of the North American Bat Monitoring Program, and she implements its monitoring in British Columbia.

David Nagorsen is a research associate at the Royal BC Museum and the Royal Ontario Museum. With more than 30 years' experience as a biologist carrying out research, fieldwork, endangered species conservation and public education, he has worked as a mammalogist and wildlife consultant, and he has authored or co-authored four handbooks on British Columbia's mammals.

Mark Brigham is a professor of biology at the University of Regina, Saskatchewan, where he researches the behaviour and ecology of bats and nightjars. In 2006, he received the Gerrit S. Miller Jr. Award from the North American Society of Bat Research for lifetime contributions.

Jared Hobbs is a registered professional biologist and wildlife photographer who has worked for 25 years throughout British Columbia on many of the province's rarest species. His images have been published in Canadian Geographic and British Columbia Magazine, and by government agencies and environmental groups.