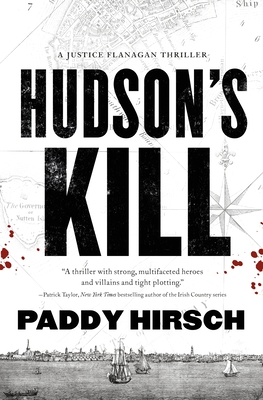 This is book number 2 in the Justice Flanagan series.

Set in 1803 New York, Hudson's Kill is the riveting next historical thriller from NPR reporter and producer Paddy Hirsch, perfect for fans of The Alienist and Gangs of New York.

New York in 1803 is rife with tension as the city expands, and whoever knows where the city will build can control it. And violence builds as a mysterious provocateur pits the city’s black and Irish gangs against each other.

When a young black girl is found stabbed to death, both Justy Flanagan, now a City Marshal, and Kerry O’Toole, now a school teacher, decide separately to go after the killer. They each find their way to a shadowy community on the fringes of the growing city, where they uncover a craven political conspiracy bound up with a criminal enterprise that is stunning in its depravity.

Justy and Kerry have to fight to save themselves and the city, and only then can they bring the girl’s killer to justice.

Paddy Hirsch has worked in public radio at NPR and Marketplace for ten years. He came to journalism after serving for eight years as an officer in the British Royal Marines, and lives in Los Angeles. While The Devil's Half Mile is his fiction debut, Hirsh has also written Man vs. Markets, a nonfiction book explaining economics.

"Stellar. ... Hirsch makes the most of his setting and has a rich vein of potential future plots to mine. Historical mystery fans will be enthralled." -- Publishers Weekly *Starred Review*

Praise for The Devil's Half Mile

"A thriller with strong, multifaceted heroes and villains, [and] tight plotting. I impatiently await the next adventure."—Patrick Taylor, New York Times bestselling author of the Irish Country series

"A tense, violent and atmospheric crime thriller set in 1799 when the white-collar criminals carried switchblades and human lives were traded like sacks of grain."—Michael Robotham, award-winning author of Life or Death

"Fast paced and often violently brutal, this tale should please thriller readers who enjoy a twist of history"—Booklist

"A solid choice for historical fiction buffs and lovers of political plots."—Library Journal