7th Grade Middle School Chronicles: "Oh Essynce, if only you could see the future..." (Paperback) 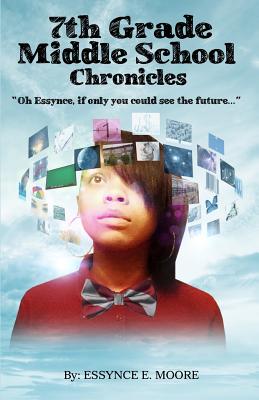 If you would have told me a year ago that I would develop a crush on one of the guys in my school, my friends would randomly just start dating one-another, or I would shave the side of my head I would...probably believe the last one. But that's not the point, the point is this year in middle school was nothing I'd predicted and this is coming from me, the girl who always says, "Expect the unexpected." But sometimes we just don't see these things coming and when they do come we have no choice but to live in the moment and let life come at us. Kids, teens, and adults who want to make sure my book is appropriate for their children to read, I bring you the sequel of 6th Grade Middle School Chronicles, the true story of my 7th grade year Xoxo, Essynce.

Essynce Moore started designing clothes at the tender age of 6 with just for fun doodles in her school binder and notepads. Her passion was and still is, to find her own style and to share her creative UPSCALE clothing ideas and styles with youth around the world. Essynce is a "TWEEN" that has turned her passion into a business for 2013, with the launch of her official clothing line branded Essynce Couture, LLC with the motto "a child's passion for fashion." Essynce Couture also has a natural body product line for children, tweens, and teens labeled "Wynk" by Essynce Couture. In 2015 Essynce launched Essynce Couture Spa and Boutique EXCLUSIVELY for Children, Tweens, and Teens to give the youth a place of their own to visit and be pampered, inspired, and educated. Essynce is an entrepreneur, child's fashion designer/stylist, author, actress, celebrity, motivational speaker, and fashionista. She's been in numerous fashion shows, pageants, karate tournaments and has spoken at numerous conferences and/or workshops. In 2016-17 Essynce is in the following movies: King of Newark, Custody, Darker than Blue - Colin Warner Project, and Maggie's Plan. She has SHOWCASED at both NY Fashion Weeks and Atlanta Kids Fashion Week while also ripping the runway. She's released her first book 6th Grade Middle School Chronicles in 2015 and has been featured on BET, Verizon Fios News, BlackNews.com, MadameNoire, The Record newspaper and a host of other news and media outlets. Essynce has also been awarded by the State of New Jersey - Senate and General Assembly upon the auspicious occasion of the Grand Opening of her business Essynce Couture Spa and Boutique, LLC in 2015 in the City of Passaic. In 2014 she was interviewed and featured on NBC (Channel 4 News), Jeff Foxx of WBLS FM, BuzzFeed, Yahoo, Verizon Fios Channel 1 News, NBC Channel 4 News, she was awarded "2014 Young Emerging Leader" by Alpha Kappa Alpha, she's been featured in the 2013 TIME for Kids Magazine, Honored 2013 Entrepreneur of the Year by the Vashti School for Future Leaders, she's been seen on the Uncle Majic Commercial (BET, VH1, Channel 11, etc), HBO (Bored to Death), and has involved herself with a host of other events and projects. Essynce is also a member of the New York Youth Chamber of Commerce (NYYCC). This young "phenomenon" is BUZZING and she can't wait to see children being pampered, as well as, wearing her Essynce Couture brand all around the world.