The Rebel and the Kingdom: The True Story of the Secret Mission to Overthrow the North Korean Regime (Hardcover) 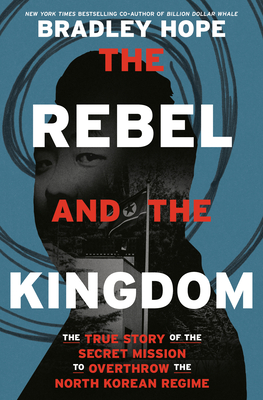 How did an Ivy League activist become a global fugitive? The New York Times bestselling co-author of Billion Dollar Whale and Blood and Oil chronicles the heart-pounding tale of a self-taught operative his high-stakes attempt subvert the North Korean regime.

“Propulsive . . . Hope’s account is both deeply reported and novelistic.”—Ed Caesar, contributing staff writer for The New Yorker, author of The Moth and the Mountain

In the early 2000s, Adrian Hong was a soft-spoken Yale undergraduate looking for his place in the world. After reading a harrowing account of life inside North Korea, he realized he had found a cause so pressing that he was ready to devote his life to it.

What began as a trip down the safe and well-worn path of organizing soon morphed into something more dangerous. Hong journeyed to China, outwitting Chinese security services as he helped asylum-seeking North Koreans escape across the border. Meanwhile, Hong’s secret organization, Cheollima Civil Defense (later renamed Free Joseon), began tracking the North Korean government’s activities, and its volatile third-generation ruler, Kim Jong-un. Free Joseon targeted North Korean diplomats who might be persuaded to defect, while drawing up plans for a government-in-exile. After the shocking broad-daylight assassination in 2017 of Kim Jong-nam, the dictator’s older brother, Hong, along with U.S. Marine veteran Christopher Ahn, helped ferry Kim Jong-nam’s family to safety. Then Hong took the group a step further. He initiated a series of high-stakes direct actions, culminating in an armed raid at the North Korean embassy in Madrid—an act that would put Ahn behind bars and turn Hong into one of the world’s most unlikely fugitives.

In the tradition of Jon Krakauer’s Into the Wild, The Rebel and the Kingdom is an exhilarating account of a man who turns his back on the status quo—to instead live boldly by his principles. Acclaimed journalist and bestselling author Bradley Hope—who broke numerous details of Hong’s operations in The Wall Street Journal—now reveals the full contours of this remarkable story of idealism and insanity, hubris and heroism, all set within the secret battle for the future of the world’s most mysterious and unsettling nation.

Bradley Hope, based in London, is the New York Times bestselling co-author of Billion Dollar Whale and Blood and Oil. He is a Pulitzer Prize finalist and Gerald Loeb Award winner. Formerly a reporter for The Wall Street Journal and a correspondent in the Middle East, Hope is co-founder of Project Brazen, a journalism studio and production company.

“The Rebel and the Kingdom is an expertly crafted thriller that makes you turn the page. What makes it all the more remarkable is that it’s all true. Bradley Hope is a first-rate reporter and writer, and he has found a subject worthy of his skills in Adrian Hong, a Korean American idealist who set out, improbably enough, to topple the North Korean regime.”—Max Boot, columnist for The Washington Post, author of The Road Not Taken

“One of the most harrowing and inspiring stories I’ve ever read . . . This book left me in tears. Hope tells this inconceivable and heart-wrenching story with compassion, humanity, and integrity.”—Yeonmi Park, bestselling author of In Order to Live

“The engrossing inside story of two recent events that are jaw-dropping even for North Korea, and the obsessive man behind them . . . This is a terrific piece of up-close reportage that reads like a spy thriller but is all too real.”—Anna Fifield, author of The Great Successor

“Bradley Hope has written a mystery story about an elusive human rights activist—and it reminds us all of the essential evil weirdness of the North Korean regime. Adrian Hong has disappeared, a fugitive from the FBI—but I’d wager that someday we will hear from this quixotic young man again.”—Kai Bird, director of the Leon Levy Center for Biography, Pulitzer Prize–winning author of The Outlier

“The Rebel and the Kingdom is thrilling, edifying, funny, and profound. Reading this book, I couldn’t help but feel uplifted to learn that, even in our disaffected age, there are people who are willing to give their life to a cause, whatever the personal cost.”—Kit Chellel, co-author of Dead in the Water

“The Rebel and the Kingdom is a propulsive investigation into the wild adventures of a man determined to bring down the North Korean regime, and the activists who joined him on his quest. Bradley Hope’s account is both deeply reported and novelistic. I flew through it.”—Ed Caesar, contributing staff writer, The New Yorker; author of The Moth and the Mountain

“Only Bradley Hope could take us so deep into this world of diplomats, dictators, and would-be spies and achieve a book that is both utterly gripping and darkly funny. Not since Bill Browder’s Red Notice have I gone on such an exhilarating trip into the geopolitical underbelly.”—Zeke Faux, investigative reporter, Bloomberg News and Businessweek

“A riveting saga of one man’s unlikely crusade to free North Korea. . . . This is the stuff great political thrillers are made of.”—Publishers Weekly (starred review)