The Illness Lesson: A Novel (Paperback) 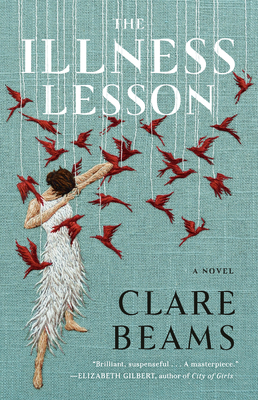 A NEW YORK TIMES EDITORS’ CHOICE • From the author of the award-winning debut story collection We Show What We Have Learned, an "atoundingly original” (The New York Times Book Review) work of historical fiction with shocking and eerie connections to our own time.

At their newly founded school, Samuel Hood and his daughter, Caroline, promise a groundbreaking education for young women. But Caroline has grave misgivings. After all, her own unconventional education has left her unmarriageable and isolated, unsuited to the narrow roles afforded women in nineteenth-century New England.

When a mysterious flock of red birds descends on the town, Caroline alone seems to find them unsettling. But it’s not long before the assembled students begin to manifest bizarre symptoms: rashes, seizures, headaches, verbal tics, night wanderings. One by one, they sicken. Fearing ruin for the school, Samuel overrules Caroline’s pleas to inform the girls’ parents and turns instead to a noted physician, a man whose sinister ministrations—based on a shocking historic treatment—horrify Caroline. As the men around her continue to dictate, disastrously, all terms of the girls’ experience, Caroline’s own body begins to betray her. To save herself and her young charges, she will have to defy every rule that has governed her life, her mind, her body, and her world.

Clare Beams is the author of the story collection We Show What We Have Learned, which won the Bard Fiction Prize and was a Kirkus Best Debut of 2016, as well as a finalist for the PEN/Robert W. Bingham Prize, the New York Public Library’s Young Lions Fiction Award, and the Shirley Jackson Award. She has received fellowships from the National Endowment for the Arts, the Bread Loaf Writers' Conference, the Sewanee Writers' Conference, and the Sustainable Arts Foundation. With her husband and two daughters, she lives in Pittsburgh.

“This is Alcott meets Shirley Jackson, with a splash of Margaret Atwood. . . . Unusual and transporting.” —Washington Post

“Both savagely acute in its portrayal of misogyny and tenderly hopeful in its trajectory.” —Pittsburgh Post-Gazette

“[This] gripping novel meditates on how an all-male establishment can denying women’s pain, and how the consequences can shape a society.” —Vanity Fair

“Expertly blends 19th-century and modern diction. . . . Steering [her] protagonist toward liberation, [Beams] seem to suggest that an honest reckoning with misogyny might produce not only solidarity, but also change.” —The Atlantic

“Frightening, suspenseful, and timely, The Illness Lesson explores the crushing weight of oppression and the indefatigable power of female defiance.” —Esquire

“An astonishing book. . . . Beams shows a kind of mastery in yoking the natural to the surreal and linking grief and fear to rage.” —New York Journal of Books

“Provocative. . . . A scathing indictment of early toxic masculinity, a measured diatribe against male-dominated medical and educational institution.” —The Washington Independent Review of Books

“Clare Beams’ writing is a revelation. . . . A fascinating mix of genres (the school story, body horror, paean to feminist anger), [The Illness Lesson] manages to achieve all the things that the best historical fiction should.” —Irish Independent

“Beams takes risk after risk in this, her first novel, and they all seem to pay off. Her ventriloquizing of the late 19th century, her delicate-as-lace sentences, and the friction between the unsettling thinking of the period and its 21st century resonances make for an electrifying read.” —Kirkus Reviews (starred review)

“Luminous. . . . This suspenseful and vividly evocative tale expertly explores women's oppression as well as their sexuality through the eyes of a heroine who is sometimes maddening, at othertimes sympathetic, and always wholly compelling and beautifully rendered." —Booklist (starred review)