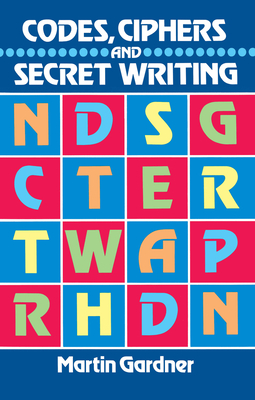 By Martin Gardner
$5.95
Usually Ships From Store in 3-5 Business Days
(This book cannot be returned.)

A fascinating, challenging book. ― A.L.A. Booklist
Learn to use the most important codes and methods of secret communication in use since ancient times. Cipher and decipher codes used by spies. Explore the famous codes that changed the fate of nations and political leaders. And enjoy hours of fun experimenting with cryptography ― the science of secret writing.
Beginning with simple letter substitutions and transposition ciphers, world-famous science writer Martin Gardner explains how to break complicated polyalphabetical ciphers and codes worked with grids, squares, triangles, and charts. You'll learn codes that are keyed to typewriters and telephone dials . . . even codes that use playing cards, knots, and swizzle sticks. Experiment with invisible writing ― inks that glow in black light and turn red under heat ― and explore the possibilities of sending messages through outer space to unknown worlds.
Using this book, you can solve the historically famous Playfair Cipher used by Australia in World War II, the Pigpen Cipher used by Confederate soldiers during the Civil War, Thomas Jefferson's Wheel Cipher, the Beaufort system used by the British Royal Navy, codes devised by authors for heroes in literature ― Sherlock Holmes, Captain Kidd, and the Shadow. And you will enjoy experimenting with bizarre methods of message sending ― the Dot Code, Knot Code, Swizzle Code, and more.
Young cryptanalysts, cipher fans, and puzzlists of all ages will find hours of intrigue and challenge in Codes, Ciphers and Secret Writing. A stimulating must for the intermediate cryptographer. ― The Kirkus Reviews

Martin Gardner was a renowned author who published over 70 books on subjects from science and math to poetry and religion. He also had a lifelong passion for magic tricks and puzzles. Well known for his mathematical games column in Scientific American and his Trick of the Month in Physics Teacher magazine, Gardner attracted a loyal following with his intelligence, wit, and imagination.Martin Gardner: A Remembrance The worldwide mathematical community was saddened by the death of Martin Gardner on May 22, 2010. Martin was 95 years old when he died, and had written 70 or 80 books during his long lifetime as an author. Martin's first Dover books were published in 1956 and 1957: Mathematics, Magic and Mystery, one of the first popular books on the intellectual excitement of mathematics to reach a wide audience, and Fads and Fallacies in the Name of Science, certainly one of the first popular books to cast a devastatingly skeptical eye on the claims of pseudoscience and the many guises in which the modern world has given rise to it. Both of these pioneering books are still in print with Dover today along with more than a dozen other titles of Martin's books. They run the gamut from his elementary Codes, Ciphers and Secret Writing, which has been enjoyed by generations of younger readers since the 1980s, to the more demanding The New Ambidextrous Universe: Symmetry and Asymmetry from Mirror Reflections to Superstrings, which Dover published in its final revised form in 2005. To those of us who have been associated with Dover for a long time, however, Martin was more than an author, albeit a remarkably popular and successful one. As a member of the small group of long-time advisors and consultants, which included NYU's Morris Kline in mathematics, Harvard's I. Bernard Cohen in the history of science, and MIT's J. P. Den Hartog in engineering, Martin's advice and editorial suggestions in the formative 1950s helped to define the Dover publishing program and give it the point of view which -- despite many changes, new directions, and the consequences of evolution -- continues to be operative today. In the Author's Own Words: Politicians, real-estate agents, used-car salesmen, and advertising copy-writers are expected to stretch facts in self-serving directions, but scientists who falsify their results are regarded by their peers as committing an inexcusable crime. Yet the sad fact is that the history of science swarms with cases of outright fakery and instances of scientists who unconsciously distorted their work by seeing it through lenses of passionately held beliefs. A surprising proportion of mathematicians are accomplished musicians. Is it because music and mathematics share patterns that are beautiful? -- Martin Gardner