The Battle for Hell's Island: How a Small Band of Carrier Dive-Bombers Helped Save Guadalcanal (Paperback) 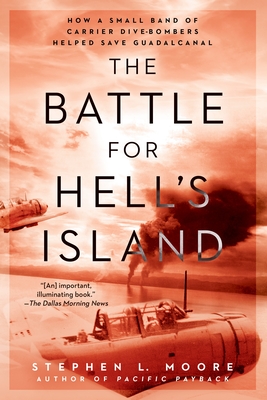 By Stephen L. Moore
$18.00
Have a question? Please let us know and we will reply as soon as we can. Thanks!

From the author of Pacific Payback, the true story of how a patchwork band of aviators saved Guadalcanal during WWII.

November 1942: Japanese and American forces fight for control of Guadalcanal, a small but pivotal island in the South Pacific. The Japanese call it Jigoku no Shima—Hell's Island.

Amid a seeming stalemate, a small group of U.S. Navy dive-bombers is called upon to help determine the island’s fate. When their carriers are lost, they are forced to operate from Henderson Field, a small dirt-and-gravel airstrip on Guadalcanal.

They help form the Cactus Air Force, tasked with making dangerous flights from their jungle airfield while holding the line against Japanese air assaults, warship bombardments, and sniper attacks from the jungle. When the Japanese launch a final offensive to take the island, these dive-bomber jocks answer the call of duty—turning back an enemy warship armada, fighter planes, and a convoy of troop transports.

The Battle for Hell's Island reveals how command of the South Pacific, and the outcome of the Pacific War, depended on control of a single dirt airstrip—and the small group of battle-weary aviators sent to protect it with their lives.

Stephen L. Moore, a sixth-generation Texan, graduated from Stephen F. Austin State University in Nacogdoches, Texas, where he studied advertising, marketing, and journalism. He is the author of multiple books on World War II and Texas history, including Pacific Payback: The Carrier Fly Boys Who Avenged Pearl Harbor at the Battle of Midway and Taming Texas, a biography of his great-great-great-grandfather William T. Sadler, who was one of the first Texas Ranger captains in the 1830s. Steve lives north of Dallas in Lantana, Texas, with his wife, Cindy, and their three children.

“A fabulous, memorable re-creation of how the war was experienced…. The Battle for Hell's Island will definitely appeal to anyone with an interest in the carrier wars of World War II.”—America in WWII

“Stephen L. Moore offers what will soon be ranked a major military classic among the past half century’s torrent of books on the Pacific War…. Not only does The Battle for Hell’s Island highlight new information and examine eyewitness accounts, vignettes and reminiscences hitherto unavailable, the text is a tome of fresh insights and re-evaluated interpretations …. A major, first-rate, authoritative contribution to the literature of WWII.”—Leatherneck