The Lure of the Moonflower (Pink Carnation #12) (Paperback) 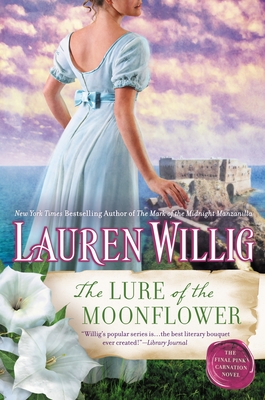 By Lauren Willig
$16.00
Have a question? Please let us know and we will reply as soon as we can. Thanks!

This is book number 12 in the Pink Carnation series.

In the final Pink Carnation novel from the New York Times bestselling author of The Mark of the Midnight Manzanilla, Napoleon has occupied Lisbon, and Jane Wooliston, aka the Pink Carnation, teams up with a rogue agent to protect the escaped Queen of Portugal.

All of Portugal believes that the royal family departed for Brazil just before the French troops marched into Lisbon. Only the English government knows that mad seventy-three-year-old Queen Maria was spirited away by a group of loyalists determined to rally a resistance. But as the French garrison scours the countryside, it’s only a matter of time before she’s found and taken.

It’s up to Jane to find her first and ensure her safety. But she has no knowledge of Portugal or the language. Though she is loath to admit it, she needs the Moonflower. Operating alone has taught her to respect her own limitations. But she knows better than to show weakness around the Moonflower—an agent with a reputation for brilliance, a tendency toward insubordination, and a history of going rogue.

Lauren Willig is the award winning, New York Times bestselling author of the Pink Carnation novels, set in the Napoleonic Era, as well as other historical novels, including The Ashford Affair and That Summer. She received a graduate degree in English history from Harvard University and a J.D. from Harvard Law School, though she now writes full-time. Willig Lives in New York City.

Praise for the Novels of Lauren Willig

“Willig’s series gets better with each addition.”—Booklist